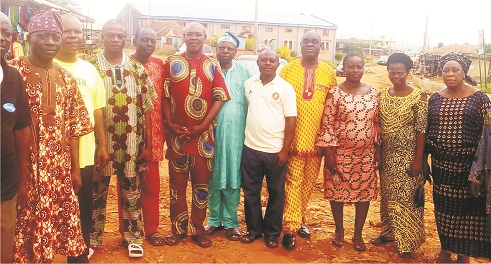 By Bisi Olominu
|
The people of Iyange/Okeogba in Akure South Local Government area of Ondo State had been traumatised for long in the hands of successive administrations. In pains they cried to government, yearned for development, but their agitations had not been answered.

The 700,000 inhabitants of the community had lived in pain and for many years never thought that they could  remembered by any government. They have cars, but many times they spent a lot to repair them at the mechanic workshops. The community topography is gully in nature and to access their houses was always difficult when there was rain. Those who cannot stomach the pains had moved to other locations within the capital.

Iyange/Okeogba community is connected with Mechanic Village along Ondo Road, but to have easy access was very difficult because of the bad road networks.

But it was a great relief when the Governor of Ondo State, Arakunrin Oluwarotimi Akeredolu early this year flagged off the road networks in the community. It was a great joy for the inhabitants as they trooped out to welcome Arakunrin, an August visitor who had come to wipe out their age long of tears, sorrow and pains away.

With harps, timbrels and drums, the people of Iyange/Okeogba welcomed the Governor and thanked him for remembering them after many promises made but unfulfilled by past governments.

A visit by The Hope to the ongoing project site revealed that out of 10,000 metres drainage to be completed in the community, 4,500 metres have been completed, while 75percent line drainage has also been completed by the contractor handling the project.

The Earth Moving is about 10 percent completion and this would be accelerated with the coming dry season.

Speaking with The Hope, the Olu of Ijaro and Chairman of Olus in Akure South Local Government Area of Ondo State, who happens to be the head of the community, Chief Frances Kehinde Alabi commended the government and the Governor, Oluwarotimi Akeredolu for the timely project in the community.

He said that the 700,000 inhabitants of the community who have been in pains, sorrow and totally neglected by successive governments would forever be grateful to the governor.

“Several years we have yearned for development and economic emancipation in Iyange/Okeogba. We had written many letters and petitions to the government of the day, but none yielded any positive response.

“When we heard that the present government had put the road leading to the community on budget, we thought it was another political gimmicks. But the day the governor flagged off the road project, that was a great day in the community.

“We are very grateful and we are saying that the people of the community are behind him. I am begging him personally to extend the road networks to other areas that have not been captured in the first phase”.

Chief Alabi also called on the state government to use the coming dry season to expedite action on the road, so as, to ease the problems of those who cannot access their houses.

He commended the contractor handling the project, saying that the work done so far was standard in nature.

Chief Alabi equally called on the state government to provide both primary and secondary schools for the community, noting that the influx of pupils to the make shift primary school established by the community has made it overcrowded.

Elder Philip Olaniyi Malomo, Chairman, Okeigbala Street, Iyange Akure said that he was elated to see development coming to the community in his life time.

He added that they have yearned for this for long, thanking God almighty that their dreams, visions and aspirations have finally come into reality.

“Governor Oluwarotimi Akeredolu has given us hope. Our cries and prayers have been answered. The people of the community shall ever be grateful to the present government. The 5 kilometre road networks is going on smoothly, drainage superbly done and the art work according to specifications. The work done so far is of high standard and we know that work shall be accelerated with the coming dry season.

” Much ground still needed to be covered, we are appealing passionately that other places not covered in the first place should be considered by the government”.

To Mr.Okunola Joseph, he solicited that the road networks should be connected to the Mechanic Village to ease the movement of those working in Ondo Road.

He also requested that primary and secondary schools which the community are lacking should be provided by the state government.

“Most of our children are going to schools in the state capital and everyday they come late for classes. Establishing a school in the community will ease our problem of spending money on taxi cab everyday “.

To Mrs. Oladipo Bosede and Iyaafin Bankole Victoria, the present government must be commended for remembering the people of Iyange/Okeogba in its projects.

They prayed that the government will continue to excel, but lamented that the road project was slow and there was the need for the contractor to work hard on the project during the coming dry season.

Iyaafin Bankole tho is a widow lamented that erosion has affected her building due to none completion of the drainage system near her house, begging the contractor to save her building from collapsing.

Prince Okunola Joseph thanked God and Arakunrin for coming to the aid of Iyange/Okeogba community inhabitants who have for long been yearning for government presence.

He commended the quality and standard work being done by the contractor, urging it to expedite action on the project during the dry season period.

According to him, the contractor deserves commendation for not doing a shoddy job, but urged him to save many houses that have been ravaged by erosion as a result of the road project.

A retired Community Health practitioner in the community, Mr. Emmanuel Adegoroye Adefila who has been living in the community for 25years thanked God for allowing him to be part of history at Iyange/Okeogba, in Akure Local Government Area.

According to him, people in the community have yearned for development for long, they have prayed until the government of Governor Akeredolu came to their aid.

He said that the whole community erupted into joy when the project was flagged off, adding that the road project will bring rapid economic development to the area.

Adefila said further that since the road project started, many who have left the community are now returning back.

He prayed for God protection for the governor and his team.

He however demanded that the state government should give the community a befitting primary and secondary schools to ease the burden of parents sending their wards to schools in the city.

The Consultant Engineer to OLSAMOG Engineering Limited, Mr. Owolafe Adesoji, who is the one supervising the road project assured that the project will be completed in the next 9 months.

According to him, the incessant rainfall this year has slowed down the work, promising that the project will be completed according to the time frame.

” The work is going on according to time. 4,500 metres out of 10,000 metres drainage has been completed. Once the draining is completed, the granite and asphalt overlay will commence.”

He urged the people of the community to exercise patient and continue to pray for good weather.

Also the Site Surveyor for Dortmund Nigeria Limited, Yayah Ridwan disclosed that the drainage aspect of the road has reached 75percent completion, covering road 1 to 6 out of road 1 to 7.

Ridwan assured that work will be accelerated in November and placement of the road will commence soon after the drainages have been completed.