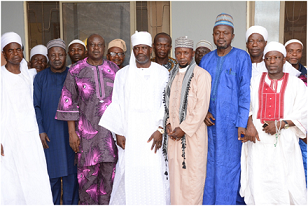 By Saheed Ibrahim
|
The Chairman and Editor-in-Chief of Owena Press Limited, Sir Ademola Adetula has called on religious leaders in the country to put an end to incessant religious crises ravaging the country.

Adetula made this call during a courtesy visit to the publishing house of The Hope Newspaper by the Grand Imam of Akure, Sheikh (Dr) Abdul-Hakeem Yayi Akorede.

The visitation was part of activities lined up to celebrate the Sheikh’s 25 years of clergy work and 13 years of Imamship.

The Editor-in-Chief noted that many religious leaders in the country have always shied away from playing their roles to ensure unity and cordial inter-faith relationship in the country.

“One of the problems confronting this country has always been the issue of religious crisis. Nigeria is a pluralistic society and there are roles religious leaders can play.

He also identified that one of the issues causing crisis in Nigeria is religious fanatism as people always address issues from their own religious views.

He therefore admonished all religious leaders in the country to ensure that there is peace in the land, saying, “if there is no peace, if there is no unity, obviously we have no country where we can be proud of. And anybody who has seen religious crisis anywhere in the world will never pray for one,” he concluded.

Adetula congratulated the Imam and commended him for his exemplary leadership style, promised that The Hope would give the activities of the celebration proper coverage.

Sheikh Yayi Akorede said that the visitation was to show appreciation to the management of The Hope Newspaper for its support and promotion in the last 25 years, describing the media as inevitable entities in the modern world.

He however called on the management of The Hope to support his 25 years and 13 years of Imamship celebration, which started on Sunday December 15 and will end on Saturday, December 21, 2019.

He prayed that Almighty God would continue to strengthen the management of The Hope and protect all its workers.