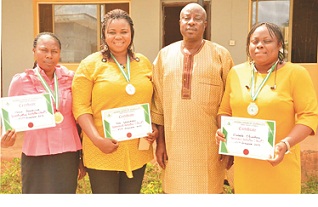 By Maria Famakinwa
|
The outstanding performance of members of the Owena Press Ltd at the just concluded Award Night organized by the Ondo State Council of the Nigeria Union of Journalists (NUJ) showed that the staff of the government media are now amenable to fresh ideas.

The Executive Chairman of the company, Publisher of The Hope Newspaper, Sir Ademola Adetula made the observation while receiving the awardees in his office.

Three reporters of The Hope Newspaper, hauled three out of the nine awards available for the Night.

Adetula expressed satisfaction over the outstanding recognition which the award has conferred on the company and said it was the beginning of greater things to come and said the company was very proud of their excellent performance.

“In the last few months, we have invested substantially on training programmes to keep the editorial staff up to date in modern journalism practice.

We saw the awards coming because of the commitment and diligence which the awardees have shown in their reportorial duties,” adding that feedbacks from readers and circulation of The Hope newspaper clearly showed that we are not doing badly in investigative journalism, he added.

Adetula described the winners as risk takers who were prepared to break down obstacles in order to shine and thanked editors and heads of department for successfully mentoring the awardees, adding that without them, they would not have excelled.

Earlier in his speech, the Editor of The Hope Newspaper, Mr Akindele Adubuola, while presenting the awardees to the Chairman attributed the success recorded so far to the doggedness of the Chairman in bringing out the best in every staff.

The Editor who described the awardees as disciplined reporters who never joked with their jobs, appealed to them not to relent as he urged others to emulate them.

Commending the awardees, the Admin Manager of the company, Mr Kole Akinjeji, thanked Sir Adetula for his efforts which he said paved way to the success recorded and appealed to the awardees to sustain the tempo.

Speaking on behalf of the awardees, Mrs Sunmola Olowookere, thanked the Chairman, Editors and Heads of Departments for their mentorship which she said made the awards possible. She assured the Chairman that the awards will spur them to do more.