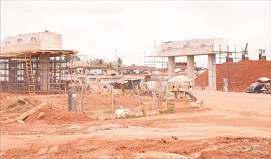 By Adekola Afolabi
|
The people of Ore in Odigbo Local Government Area of Ondo State have started witnessing an upsurge in economic activities as a result of the attention given to infrastructural development in the town by the present administration in the state.

Ore is the gateway that connects Lagos, the nation’s economic nerve centre with both the Eastern and Southern parts of Nigeria on a direct stretch.

The historical town also provides an adjoining corridor to the Northern part to the country.

The people, who spoke to Government House reporters  said new investors are responding to the massive infrastructural interventions in the town, initiated by the Akeredolu administration.

While saying that the responses of investors to government deliberate infrastructural upgrade of a town are usually spontaneous, the people said the current rise in  economic activities in Ore is exciting to them.

An entrepreneur, Mr Olawoyin Owolabi, who has lived in Ore for over four decades, said the commitment of the present administration in Ondo State has scaled up unprecedented socio-economic activities in the town.

For Prince Temidayo Akinbobola, who was born in Ore and had lived in the town for over thirty years, the ongoing construction of the first overhead bridge in Ondo State in Ore by the Arakunrin Oluwarotimi Akeredolu administration has begun to impact on the  socio-economic lives of the people.

He said the people are happy that Governor Akeredolu is fulfilling his electoral campaign promises to them, and believed that the vision of the State Government to turn Ore to a Mega-City would soon be realised.

A commercial motorcyclist, Mr Abiodun Babafemi, said the ongoing Ore Inter-change would in no small way guarantee the security of lives of all motorcycle riders in the town.

Also, the Chairman of Isero Branch of National Union of Road Transport Workers (NURTW), Mr Suleiman Murufu, said the people are already witnessing a turnaround in the economic activities of the town following the ongoing construction of the Ore Bridge.

Despite incessant rainfall slowing down the pace of work at the bridge construction site, 23 of the 30 Beams needed are ready, while other casting and earth fillings were ongoing.