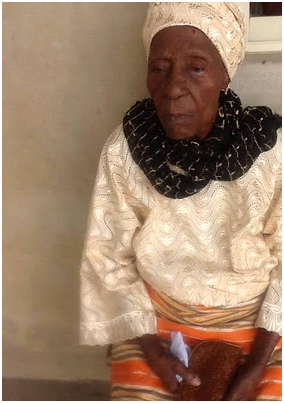 Baring any last minute change, the remains of the mother of the late highlife juju musician, Dr Orlando Owoh, Mrs Christiana Morenike Owomoyela,  will be buried in Ifon, headquarters of Ose Local Government of Ondo State.

Mama Morenike died on Wednesday at her Owo residence after a brief illness.

A spokesman of the family,  Mr Eniolorunda James, who disclosed this to Friday Extravaganza at the Francis Aderohunmu street, Okedogbon, Owo residence of the deceased, said the family will soon meet to decide the burial date and funeral activities.

According to Eniolorunda, it was the wish of late Dr Orlando Owoh, that her mother be buried in Ifon.

Mama, a mother of six children, including, late Dr Orlando Owoh,  was living with the ace musician until his death before she came back to Owo.

She attended primary school in Owo,  where the late Mrs Babafunke Ajasin, wife of the former governor of Ondo State, late Pa Adekunle Ajasin was her teacher.

She later proceeded to Queens College, Lagos, as one of the first set of students of the  school.

Meanwhile, Eniolorunda has called on the Ondo State Government to rehabilitate the Francis Aderohunmu street road, on which the house of the late mother of Dr Orlando is situated.

According to him, this will fulfill the long desire of the late woman to see that the road is done.

Describing the bad condition of the road, which is a little over 300 metres, Eniolorunda said the corpse of the deceased had been taken to the morgue.

‘Comply with COVID-19 guidelines or be shut’