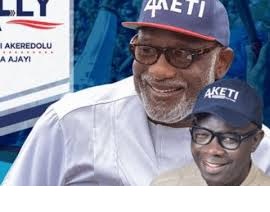 The leaders gave the assurance in Ifon, headquarters of the council area during an empowerment programme by an illustrious son of Idogun Mr. Adekunle Denis.

The programme brought together community & opinion leaders from all the 12 political wards & 126 voting units of the council.

Welcoming the participants, the philanthropist, Adekunle Denis said the empowerment program was his own little way of appreciating the leaders, women & youths across the council area for their unwavering support for the governor Arakunrin Oluwarotimi Akeredolu SAN in the last three years.

He used the opportunity to encourage the people of Ose to redouble their support for the governor in view of his second term ambition.

Also speaking, the APC chairman in Ose ward 3 chief Ajibola Ogundipe expressed the preparedness of leaders in Ose to continue to cue behind Arakunrin Akeredolu in his second term bid.

Others who are unanimous in their decisions to work assiduously for the actualization of the second term ambition of Arakunrin Akeredolu charged political appointees from the council area to emulate Mr Adekunle Denis in his quest to give back to the society.