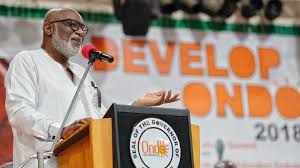 By Chris Chimezie
|
Ondo State Governor, Arakunrin Oluwarotimi Akeredolu (SAN), has described the rebirth of the Ondo State Education Endowment Fund (OSEEF) as a move targeted at bridging the funding gap in the education sector for its sustainable and optimal growth.

The Governor made the disclosure while inaugurating members of the Board of Trustees of OSEEF at the International Culture and Event Centre (The Dome) in Akure.

He said his administration recognizes the fact that education funding is too important to be left in the hands of government alone which necessitated the move for the state to achieve functionality in the sector.

“You will agree with me that education must be the business of all stakeholders. Quality and affordable education is one of the keys to development and economic empowerment of the citizenry in any developed nation.

“Hence, the need for the facilitation of development funds to expand the funding base of the existing OSEEF.

“The re-launch of OSEEF is also intended to explore available opportunities with the development of key infrastructure in the state.

“It is aimed at creating a platform for all stakeholders in the education sector, both locally and internationally to support the transformation of the sector in the state through collective financing and ensure provision of functional education and e-learning platforms in our educational institutions across the state”, he said.

Describing the members great men with best brains who have excelled in their respective fields, Akeredolu charged them to justify the confidence reposed in them towards reviving the sector.

Responding, Chairman of the Board, Mr Sola Akinfenwa thanked the governor for counting them worthy to handle the task and assured that they will come up with ideas that will move the state education to the desired level.

“As representatives of the people, we will be coming with noble ideas that would lift our Schools to reckoned with from primary to the tertiary level”, he said.

Akinfenwa lauded the giant strides of the Akeredolu-led administration in the area of repositioning the education sector for optimal performance through the renovation of over 500 Schools across the State which is still ongoing.