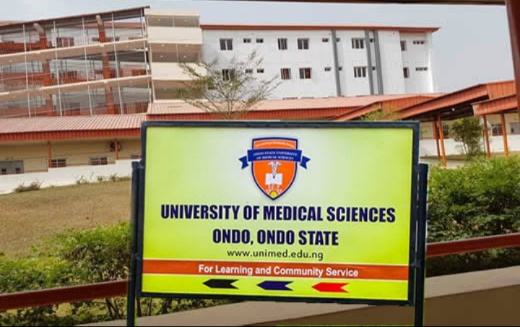 By Sade Adewale, Ondo
|
The Chief Medical Director of University of Medical ScienceTeaching Hospital  Ondo  (UNIMEDTHC), Dr. Oluwole Ige has described the visit of the Osemawe and the paramount ruler of Ondo kingdom,  Oba Dr. Victor Kiladejo to the hospital  as an expedient one intended  to  assess the level  of infrastructural  development in the hospital.

He disclosed this while playing  host to the Osemawe in his office, saying the visit was an opportunity to interface with leaders of the kingdom in such a way that vital information would be passed  across to the people on the restructuring of Ondo and Laje Teaching hospital complex.

Dr. Ige stated that the present administration of Governor Oluwarotimi Akeredolu is doing excellently well to improve the standard of healt care services in the state compared  to what it  used to be in the past through the establishment of teaching hospitals   that are affordable, qualitative and accessible to the people.

He rated the quality of healthcare services  being offered  at the UNIMEDTHC high , saying it is similar to what is obtainable  overseas  and at affordable and accessible rate.

Dr. Ige added that UNIMEDTHC health coverage is for everyone, everywhere, and at every moment without financial hardship.

Responding, the Osemawe of Ondo kingdom, Oba Dr. Victor Kiladejo expressed his delight  at  the ongoing construction and reconstruction  works  in the hospitals complex.

He scored the Governor of the state high for establishing the teaching hospital in the state at this very time for the benefit of the people.

The   monarch  advised the management of the teaching hospital to avoid duplication of services  in Ondo and Laje  saying the two facilities should rather  operate  to complement  each other  in a seamless way using ICT.

Also, Kiladejo explained that they should avoid developing one complex better than the other.

He urged that necessary gadgets should be on standby for any transfer of patient s while  signals  should be on to inform the  other complex about the incoming patient.

Oba Kiladejo promised that a committee on hospital and community would be  constituted  to relate with  the teaching hospital for effective service delivery and  other areas where the community can equally partner with them to  improve  healthcare  services for people.

He said the kingdom is already working on the committee saying that in the next two weeks, they will be inaugurated.

The Osemawe was accompanied   on the visit by the Lisa of Ondo Kingdom, High Chief Simeon Oguntimehin and  the Sasere of the Kingdom, High  Chief Adeduro .