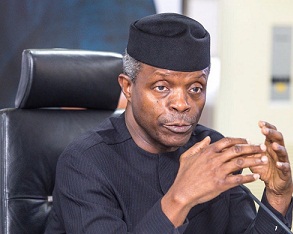 They implored Nigerians to imbibe philanthropic spirit by dedicating their wealth and resources to serve God and to impact positively on the lives of others.

The four eminent Nigerians spoke on Saturday at the unveiling and dedication of Owa Ofokutu (Memorial) Ecumenical Centre (OOFEC), in Ilesa, Osun State.

Owa Ofokutu, was the paramount ruler of Ijesa land from 1842-1856, and the edifice was built, donated and dedicated in his memory by Professor Debo Adeyemi of Ofokutu’s royal family.

The Vice President, Yemi Osinbajo who was represented by the Chaplain, State House, Abuja, Pastor Seyi Malomo, called on Nigerians to promote unity, love and togetherness.

Osinbajo who described unity as central to development, said Nigerians must begin to see strength in their diversity.

In his remarks, General Abdulsalam Abubakar, described the good gesture of the donor as “phenomenal and worthwhile”.

He advocated the need for Nigerians to renew their faith in God by rededicating themselves to service and humanity.

On his part, General Yakubu Gowon, urged Nigerians to emulate the good gesture of the donor.

Gowon noted that the dedication of the buildings to service and humanity was an affirmation to biblical verses.

Inaugurating the edifice, Governor Oyetola, urged Nigerians to focus on things that can strengthen the bond of unity.

He further said “Beyond the fanfare and the solemn dedication ceremony of today, this event has an underpinning philosophy of ‘all-inclusiveness’ attached to it. The concept of ‘Pan-denominational’ Ecumenical Centre symbolises the onenes and the bonded unity of the Church, which is awesome, and towers above all other mundane considerations.

The donor, Professor Debo Adeyemi, attributed the gesture to divine inspiration from God.