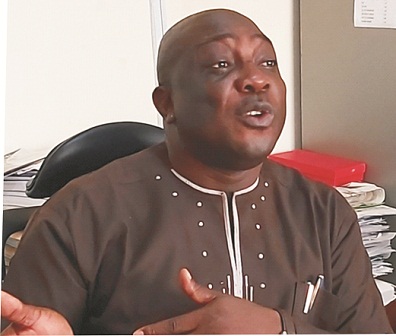 |
The Chairman, Ondo State Oil Producing Area Development Commission, OSOPADEC, Mr Gbenga Edema has debunked allegation on diversion of the commission’s fund, saying the present administration has been the most transparent in the management of OSOPADEC fund.

He said that it would be wrong of the commission to divert money meant for it to the Office of the State First Lady.

Edema made this known in an interview with The Hope in his office yesterday.

This came on the heels of some newspapers’ reports alledging that funds meant for the development of the riverine area of the state was being diverted to run the Office of the state’s First Lady.

He said OSOPADEC only sponsored children from its mandate area to participate in the  pet project of the wife of the governor, BEMORE.

“We only collaborated with her on one of her projects, BEMORE, in which over 120 girls participated in the programme and were trained in different capacity building programmes like solar power energy generation, bead making among others.”

“It is also not true that the wife of the governor is taking funds from OSOPADEC”, he stated.

According to him, sponsoring of school children in the area for trainings is one of the reasons for its establishment Edema hinted that one Aanuoluwapo Ebiseni from Ilaje who participated in the BEMORE solar power production training will be among the five children that will be traveling abroad soon as a result of participation in the  project

On the Ilaje youths who barricaded Governor’s office on Monday demanding for autonomy for the commission , the OSOPADEC boss submitted that they were either ignorant or  mischievous, saying the law that established OSOPADEC was clear about the issue.

“I don’t know what they mean by autonomy.  I have tried to look at the meaning in the dictionary which means distinct, independent. So, is it possible for OSOPADEC to be independent based on the law that set it up? The law says the Chairman and the board members will be appointed by Mr Governor.

“The law says in the exercise of his function, the governor shall direct, control and supervise OSOPADEC, that is what the law says! So what kind of autonomy are they talking about?

He said the commission has embarked upon water projects worth N1.9billion and laying of pipes and reticulation project for about N2.3billion, now functioning and paid old contractors N2 billion.

He said they were in the process of paying 2017/2018 bursary for students of the mandate area, adding that no state government can single handedly battle Sea incursion without effort from the federal government.