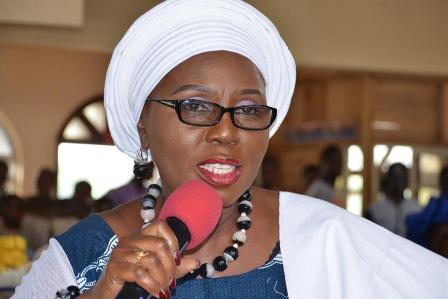 The wife of Ondo State Governor, Arabinrin Betty Anyanwu-Akeredolu has presented start up kits and certificates to over 60 women who participated in the skill acquisition and empowerment programme OSSA-EP.

The event which took place at Babafunke Ajasin auditorium Akure was to mark the closing ceremony of the one month life enhancing skills.

The participants who were selected from the three senatorial districts of the state were trained in different skills such as decoration, makeover and gele ,Wig making, tye and dye, bag making, bead making, fashion designing, soap making among others.

While congratulating the beneficiaries, Mrs Akeredolu likened the programme to the BEMORE experienced and stressed the need for the country to empower the womenfolk which represents half of its population if the country is to be regarded as an economically developed nation.

Her words: “To change this country from its state of penury and unacceptable level of poverty, women who constitute half of the country’s population must be empowered. You cannot be talking of joining the league of economically developed nations when half of your population is illiterate, and those educated are unemployed.

”It cost nothing to change the narrative for women in this country. All it requires is for somebody to sit down, strategise with sincerity of purpose and execute a programme such as this with the aim to lift women out of poverty.  Not half-baked programmes like training people without giving them start up kits.”

The Commissioner for Women Affairs and Social Development, Mrs Olubunmi Osadahun, charged the beneficiaries to see the empowerment programme as an opportunity to give back to the society, urging them not to sell the start up kits.

The Senior Special Assistant on Gender and Documentation who also coordinated the programme, Mrs Temitope Daniyan, advised the beneficiaries to see the empowerment programme as a rare opportunity needed to effect positive changes in their lives and assured them that monitoring teams are in place to do follow-up as they progress in the skills acquired.

One of the beneficiaries, Abigail John, thanked Mrs Akeredolu for coming up with such a laudable programme to overcome poverty and promised to make the best use of what she described as a golden opportunity.