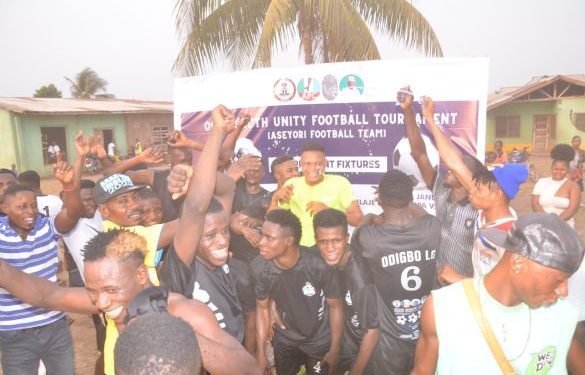 The football tournament was organised by Dr. Jimoh Ibrahim, CFR, the Ondo South Senatorial Candidate of All Progressives Congress, APC.

The football match held at Premier College, Ode-Irele in Irele LGA, saw Odigbo’s playmaker, Niyi Musa displaying sterling performance, as he fired thunderous shot into the Ese-Odo net from from his team mate two minutes to the end of first half.

The Youths of the two teams exhibited and displayed excellent talents through the 90 minutes of play, leaving spectators to cheer them with great excitement.

The Chairperson of the tornament, Mrs. Folawe Sipasi-Aluko, had earlier advised the teams not to see the competition as a do-or-die affair but should imbibe fair-play throughout the competition.

She, however, urged youths to be rest assured of vibrant transformation of Ondo South if Ibrahim is elected at the polls.

The youths who were filled with ecstacy after the match, jubilated with the Convener of the tournament, Dr. Jimoh Ibrahim, CFR, the All Progressives Congress (APC) senatorial candidate for Ondo South, describing him as the best candidate waiting in the wings to win the February 25 Senatorial election in the district.

In his reactions, the All Progressives Congress (APC) senatorial candidate for Ondo South, Dr. Jimoh Ibrahim CFR who was beamed with great excitement at the youth jubilating gesture, noted that the tournament was initiated to develop sports’ interest and foster unity among youths in the six local government areas of the district.

Other fixtures of the tournament will see Ile-Oluji/Oke-Igbo LGA up against Ilaje LGA on January 25 in Okitipupa Government field , while Okitipupa will tackle trade with Irele on January 30, 2022