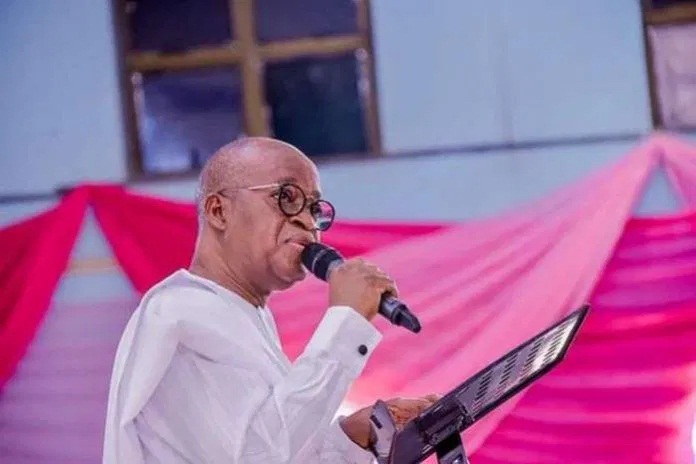 Osun State Governor, Gboyega Oyetola has approved the release of the sum of one billion, one hundred and eight million naira (N 1,108,000,000) for the settlement of pension arrears.
This was disclosed by the Head of Service, Dr. Festus Oyebade while giving his remarks during the inter-religious prayers organised by the government to kick-start the 2021 work year.
“People wonder why we are always elated when the name of Governor Oyetola is mentioned. It is because he has shown himself as a man who cares about the welfare of workers and the people he governs.
“In spite of the challenging times in the year 2020, he did not undermine the welfare of workers and citizens. We will recall that he approved the implementation of annual increment, minimum wage, promotion and conversion for workers in the State without agitation.
“Barely 17 hours to Christmas, the Governor told me that he was bothered about how the celebrations would be for pensioners, and not long after, he summoned the Commissioner for Finance and the Accountant-General, and asked for a quick intervention.
“The sum of Five hundred and eight million naira of the total sum was approved to pay the pensions of retired civil servants; the sum of One Hundred and fifty million naira was approved to pay retirees under the contributory pensions scheme; an additional Fifty million naira was approved for the part-payment of the gratuities of retired officers under the old pensions scheme.
“Aside this seven hundred and eight million naira (N708,000,000) breakdown, the Governor approved another Two hundred million naira (N 200,000,000) for those who have not had their contributory pensions.
“Just when the beneficiaries said they wanted to come and appreciate the Governor for making their welfare priority, he approved another Two hundred million naira on Monday to further offset pension arrears.
“This is a laudable feat because the pensioners have not had it this good since 2016”, Oyebade stated.
The prayer meeting had in attendance representatives of the three arms of government, cabinet members, senior civil servants and clerics.
The service had a reduced congregation in accordance with the state’s new COVID-19 guidelines.