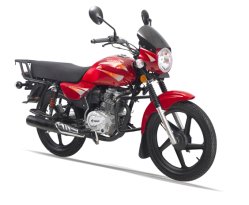 Residents of Ipetumodu in Ife North Local Government area of Osun State have lamented the spate of motorcycle snatching by robbers along Ipetumodu-Ode-Omu road.

The road, according to them, has become death trap as some hoodlums have been using the route to perpetrate snatching motorcycles from their rightful owners.

The  residents accused the police patrolling the road of extorting the road users, especially motorcyclists, instead of securing the route for them.

Speaking with our correspondent, a resident of the area who pleaded anonymity said the case of motorcycle snatching is now rampant along the Ipetumodu-Ode-Omu road, disclosing that some robbers have turned the route to hideout.

“The Ipetumodu-Ode-Omu road has always been a deathtrap. Some unscrupulous people mostly use this route to perpetrate their evil act of snatching motorcycles from owners for over a year.

“It will be good if our local security personnel can be strategically placed around the area. It will really help,”he advised.

Another resident of the area, who identified himself as Mr Adekunle complained that the rate at which robbers snatch motorcycles was alarming, calling on the police to be up and doing in securing the route for its users.

He suggested there should be checkpoints at connecting boundaries of Ipetumodu and Ode-Omu, saying  it would go a long way in addressing the problem.

However, the  residents of Ipetumodu, urged the Divisional Police Officer (DPO) of the town to send his team on patrol to Isasa bridge, noting that the step would help to checkmate the nefarious act.