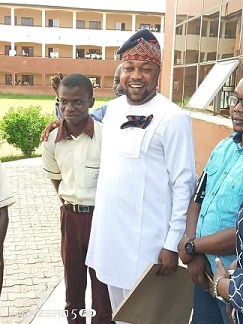 From Fisayo Akinduro, Osogbo
|
A lawmaker representing Ife North Constituency at the  Osun State House of Assembly, Mr Tunde Olatunji has said he will fund the university education of the best candidate in the JAMB UMTE Examination from the state.

The candidate, Mr Kamardeen Ridwan, a student of Ataoja High School Osogbo, who applied to study Medicine at the University of Ibadan scored 319 in the Joint Admission Matriculation Examination to lead other candidates who sat for the national examination in the state.

The lawmaker’s  visit to the school was to celebrate Leah Sharibu’s birthday and draw attention of young schools girls to the plight of Sharibu who has been in terrorist captivity for almost two years.

In his address,  Olatunji expressed concern about the brilliant, but indigent young people in Nigeria, particularly the rural areas.

He pointed out that resources deployed by affluent Nigerians on ceremonies could be converted to charity to better the lots of many people, rescue destinies and rescue Nigeria by extension.

Ridwan is an indigent boy of 17 years of age and the first child in a family of five with the father a mason (bricklayer) and the mother a ‘fufu’ seller ( cassava flour seller).

The principal, Dr Titi Adeagbo who broke down in tears at what she described as a miracle narrated how she fasted, for God to send a sponsor to the brilliant boy.

According to her, Ridwan passed WAEC with 8 distinctions at first attempt in SS2.

Ridwan was not the only student who benefited from Olatunji’s visit to the school, as a female indigent girl in SS2, Miss Ifeoluwa Adeyemi also received scholarship to higher institution level.