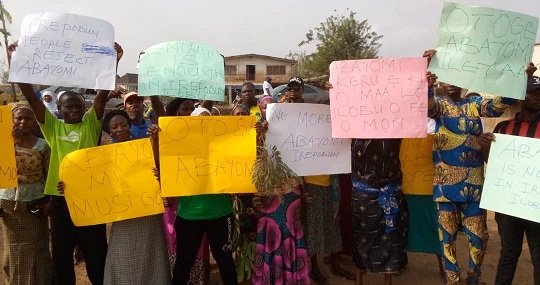 Some members of the All Progressives Congress (APC) in Irepodun South Local Council Development Area of Osun state, on Thursday, protested against the forth chairmanship ambition of Kamalideen Oloyede popularly known as Jay Kay.

The members had earlier converged on the party Secretariat located in front of AUD Primary School, Erin Osun, marched through the streets of the town and later terminated the protest at the Elerin palace, Oba Yusuf Omoloye Oyegbodun II

Armed with placards with various inscriptions such as “4th term is abomination”, Erin-Osun Youth Says No To JK 4th Term Ambition”, Mr Governor Must Remove Him from the race,” among others.

The protesters alleged that  Oloyede whom they said has led the LCDA since its creation about seven years ago, said they have many other members of the party who are also capable and qualified to lead the council.

They said Oloyede had ruled for three terms in office, alleging that he did not show interest in the contest until recently when he started threatening that he was the only anointed candidate of the governor and nobody should dare compete against his candidature.

They said that they heard it on good authority that the party leadership was  planning to impose Oloyede on them which they vowed to resist.

Speaking to Journalists, one of the stakeholders in Irepodun South LCDA, Erin-Osun, Mr Opeyemi Kamilu Yusuf, said that the youth of the party trooped out to protest as part of mechanisms to express their discontentment over the alleged endorsement of the present Chairman by the Governor of the state and the party leadership.

He stated that the people of the local government were not happy with the situation, adding that thousands of members are loyal to the present government under the leadership of Governor Gboyega Oyetola, hence the need to give another person chance to take the mantle of the leadership in the LCDA

Echoing a similar view Alhaja Ola, who hails from Ward 7 said there was the need for change in the leadership position in the LCDA.