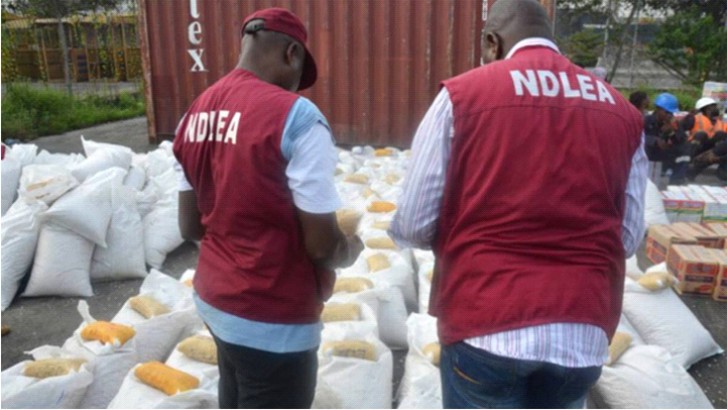 The National Drug Law Endorsement Agency (NDLEA) in Osun State said it had destroyed drugs weighing 24.486 tons.
The Osun NDLEA Commander, Yomade Ogunbiyi, explained that various types of drugs including 24, 349, 24kg of cannabis sativa and 136,471kg of Psychotropic substance were seized and destroyed.

Ogunbiyi stated that the destroyed drugs are exhibits from the court order of 2020, adding that since then, they have made huge seizures.
Describing Osun as one of the Cannabis producing states in Nigeria, Ogunbiyi said lot of cannabis farms were destroyed in years past, saying the agency is still intensify efforts to ensure cultures of cannabis production are totally eradicated in the state.

While urging the people of the state on the need to join hand with the agency in its bid to tackle drug abuse , the state commander of NDLEA hinted that the agency will soon launch its own War Against Drug Abuse (WADA), a national program launched by the president during the June 26, 2021 celebration.

”A total of 24,486 tons of assorted drug exhibits is been destroyed today. As you are aware, public destruction of exhibit is stipulated in the act which established NDLEA (CAP N40LFN as amended ).
“To fully appreciate the drug problem, NDLEA Osun State Command arrested and seized, in the last five years; 2017-3335.311kg, 2018-1148.5kg, 2019-2,424.587kg, 2020-1,006532kg, 2020-1,006532kg and 2021- January till date-3,001.44kg.
“Osun State is one of the Cannabis producing states in Nigeria. Lot of the farms were destroyed in the years past. Efforts is seriously going on to eradicate the culture of cannabis production in the state. However all hands should be on deck for it to come to reality”, he said.
Earlier, in his address, Chairman/Chief Executive of NDLEA, Brig. General Mohamed Buba Marwa (Rtd) commended the state command of NDLEA for the work well done, saying the magnitude of drugs coming out of the farmlands was not a thing of joy.
Represented by the NDLEA, Director Operations and General Investigation, Adeyemi Adeofe, the agency boss said the burning of over 24 thousand tons of various types of exhibits become necessary as it’s part of the efforts to reduce the crime rate in the society.

“If we have not seized and destroyed them now, they should have been taken to the society and somebody would have been consuming it and when they consume it , it would have a lot of negative effects in their central nervous system and their health.
“And most of the crimes we are seeing in the society now such as banditry, kidnapping and all sorts of crimes are closely associated with dugs.
“We are trying to cut the supply of drug. We are trying to reduce it that’s why we are burning this and by the time we can reduce it, there would be less in the circulation.
“The agency has invested a lot of resources to seize this magnitude of drugs. I commend the commander, officers and men of this command for a job well done.”