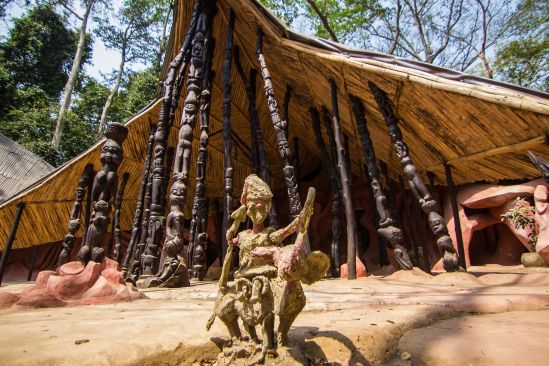 As the annual international Osun-Osogbo festival holds  today,  residents and visitors have been assured of adequate security in order to have a hitch-free celebration.

The Ataoja of Osogbo, Oba Jimoh Oyetunji, who  gave the aasurance said that no fewer than one million people are expected to attend the grand finale of the 2019 Osun Osogbo Festival.

As a mark of the bond that was established six centuries ago, Osogbo residents and indigenes gather annually to celebrate what they observe as their Founder’s Day.

A unique cultural practice built around the relationship that existed between a river goddess and an ancient king, Oba Gbadewolu Laroye inside the Osun Grove, marked the origin of the Osogbo ascendancy and kingship institution.

The festival which started on August 5 with the “Iwopopo” where the king danced from his palace to popo street, the lighting of “Ina Olujumerindinlogun”, a 600-year-old, 16-point lamp and the traditional cleansing of the town of evil.

The Ataoja assured residents of the state and visitors that all arrangements have been put in place to ensure that the event is peaceful and successful.

He said that devotees and tourists among others were expected from within Nigeria and outside the country.

The monarch while explaining that the festival is an annual ritual in fulfilment of the promise to Yeye Osun, the goddess of River Osun, stressed that over the years, it has grown in stature and reputation to merit a listing by the United Nations Educational Scientific and Cultural Organisation in 2005 as a world heritage site

He appreciated all sponsors and partners for their support to ensure the success of the festival, praying that every sponsor and partner will continue to prosper in their various endeavours.