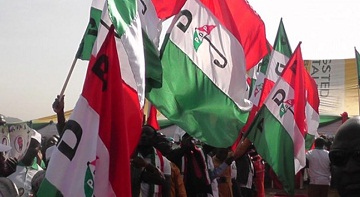 Ahead of the Sunday swearing-in of the new Governor Elect, in Osun State, Senator Ademola Adeleke the State chapter of the Peoples Democratic Party (PDP) has urged all its teeming supporters and  members  to embark on fasting and prayers to ensure successful transition in the State .

A statement by its State Caretaker Chairman, Dr Akindele Adekunle, the party instructed members to go to their mosques, churches and their places of worship to seek divine support as the state moves towards transition of power.

” Let us again continue to report to the Almighty God who enthrones and dethrones. Let us intensify our prayers for divine grace on Osun State to witness eventual enthronement of Imole, Senator Ademola Adeleke as the next executive governor of Osun state.

This week is declared as days of heavenly intervention such that the armour of God which Adeleke’s two-finger- symbol represents will reign supreme in Osun State,” the chairman explained.

He called on party members to be peaceful and to be on the look out for provocations from unscrupulous people, urging party’s members to hold fast to God as they move to the last phase of the political struggle.

” You will be tempted. You will be provoked. Be mindful not to fall to their trap, their hidden agenda to set the state ablaze. Be conscious of our responsibilities to Man and God to ensure peaceful transition on Sunday”, Dr Adekunle noted.

He also called on the Inspector General of Police to deeply monitor development in Osun state and deploy surveillance team to ensure a seamless change of government on November 27th.