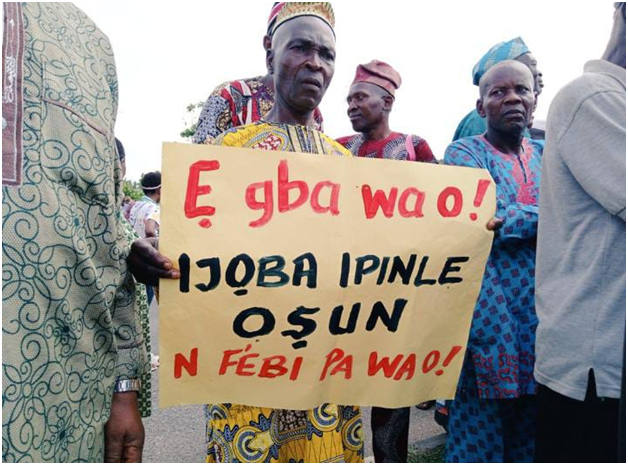 Pensioners in Osun State on Tuesday shut the state government secretariat in Osogbo to protest the non-payment of their entitlements.
The pensioners in their numbers are Primary and Secondary Teachers retirees.
The Hope Metro gathered that they were being owed by previous administration of former Governor Rauf Aregbesola under the Contributory Pension Scheme.
The pensioners were seen displaying placards with inscriptions such as “Gov. Oyetola, Stop this lying and fake promises. Pay us our money,”, “we are dying of hunger”, “Masses, help us we are dying”, “Dead people cannot enjoy infrastructure”, among others.
The embittered pensioners accused Governor Gboyega Oyetola of receiving billions of naira, yet he defaulted in the payment of pensions of retirees.
Speaking, one of the protesters, Michael Adebayo said Governor Oyetola has refused to give them their gratituty/pensions and 29 months half salary arrears from 2016 till date.
He further explained that though the state government had gone on air announcing the release of millions of naira to pensioners saying to their own amazement, the claims by the state government was very far from the truth .
He hinted that they would continue to protest until their plights are considered.
“We would continue to protest until the state government respond to our demand. We worked and contributed so we can have our Contributory Pension to be useful for us.
“Nobody or party is bankrolling us against the government we are concerned about our money. Hunger forced us to the street to embark on protest.
“We have people in Ibadan, Lagos and many places who can help us but they always hear the news that state government release money for us , by that that they hold back meanwhile the money is not going round. The Head of Service announcement that government is releasing money for is false. We are coming here on 29.
Echoing similar views, another protester, Mrs Salami Bamidele said, “From the way you talk, I can see that you don’t have regard for us. If you truly prioritize us and know that we are hungry since last year December that we have been protesting, it should have improved.
“You are claiming that you have paid our money but it is a lie. You are releasing 708 million monthly what get to we that are under contributory pensioner is very small, it is very small compare to our population. We met the governor in July 2021 because the money is not enough and he promised us that he will improve on it . We did not see any difference as Government continue to give us 150 million in March and April which is not even every month.
“2016 retirees that have not collected anything are about 600. The recent money that they released recently, only 76 of us benefitted. We are dying, battling with sickness.
“You claimed that the present administration is battling with backlog, it is so unfortunate, government is continuity, anybody that get to the seat of government will inherit both asset and liability, that an administration left debt for us shouldn’t be part of what you are saying because you are of the same party.”
Addressing the pensioners, Osun State Deputy Governor, Mr Benedict Alabi appealed to the protester to exercise patience saying government is working tirelessly to ensure they all get their pensions.