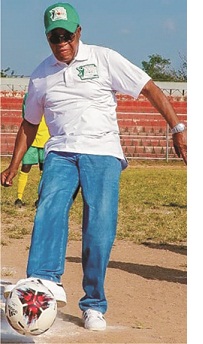 He noted that in 2019 alone, Osun athletes ruled the sporting world, carting home loads of medals.

The governor disclosed this at the Nigeria’s President National Under-20 Male Youth Football Tournament tagged “Osun AYSOF 2019”, organised in commemoration of the 1st Year Anniversary of the Oyetola’s administration in Osogbo.

“For us in Osun State, sport is not only a medal-winning and recreational activity, it is principally an instrument for imparting leadership skills in the youths to enable them to perform their roles as leaders of tomorrow.”

He admonished the youths to shun acts and behaviour that can mar their future.

“It is my firm belief that with their involvement in sports and other useful activities, we shall succeed in engaging them in meaningful activities that would be of immense benefit to the individuals and indeed all our people.”

He said he is impressed by the foresight of the African Sports Federation (AYSOF) in initiating such a programme that would uplift sports from the grassroots level and bring together youths from all over the country to interact in a friendly atmosphere.

Oyetola was also lauded by the leadership of the African Youths Sports Federation for implementing policies and programmes targeted at securing a better and rewarding future for the youths in the state.