Home General Special Focus OSUSTECH: The pains and gains of a university 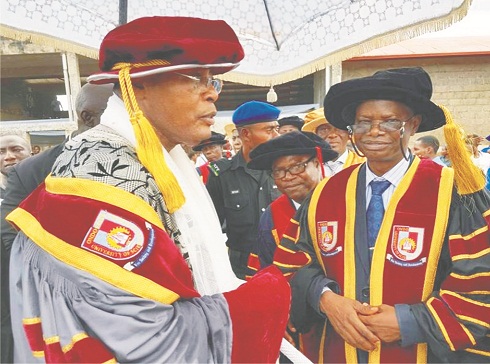 By Kayode Crown
|
The Ondo State University of Science and Technology (OSUSTECH) Okitipupa came into being on September 27, 2010, having been established by law in December, 2007, as the second Ondo State owned university after Adekunle Ajasin University, Akungba Akoko. It was supposed to serve as a way for the southern senatorial district of the state to have an higher institution of learning located there.

But the journey of that citadel of learning has been torturous, so say the least. Right now, after close to ten years of existence, it is littered with 17 uncompleted projects, including library, hostels and lecture theatres.

It should be noted that it was at the advent of the APC administration in Ondo State that the road to the school was paved, making it accessible. Also after many years of its existence, it was just last year that the number of faculties was increased from one to three, and in a way, moving away from being termed a glorified secondary school.

The APC-led Ondo State government also released the structure of the Mega Primary School, Okitipupa to the university for take off of the Faculty of Engineering.

A major pain the school had been going through since inception is the lack of electricity. The school has been in the throes of darkness for long and it has become a weight that is dragging it down.

As at today, about N10million is being expended every three months for diesel to power generators to run the school. Not only that, the school has no hostel accommodation, with the hostel projects started by NDDC and OSOPADEC long abandoned.

All these came to light when Special Focus spoke to the Vice-Chancellor of the school, Prof. Robert Ogunduyile via telephone call.

He was full of praises for the Oluwarotimi Akeredolu-led government for the assistance the school received from the government to increase the number of faculties from one (Faculty of Science) to three, with the last year addition of the Faculties of Agriculture and Engineering.

Prof. Ogunduyile, whose appointment as the Vice-Chancellor was announced on 21st February, 2017, a few days to the inauguration of the present administration in the state said: ”You know OSUSTECH has been a one faculty school for several years, for eight years, but with the support of government, we were able to start the Faculties of Agriculture and Engineering and that has actually added more to the school. It has given OSUSTECH more recognition. People now recognise it more than when it had just one faculty, and we have more students in those two places. You can look at OSUSTECH as a university that is coming up very fast.

“Now we have three campuses. The Mega School Okitipupa was released to us and that is where we house the Faculty of Engineering. And with that structure there, its a big achievement on the part of that government because that structure is now fully utilised. So we have that as a campus.

“We have the mini campus where the university started from. That one is used for the Faculty of Agriculture. And we have the permanent site where we have all the abandoned projects.”

On the lack of electricity and how it has been affecting the university, and what the government is doing about it, he said: “The government also have been up and doing with respect to the electricity project of the school. The people are working day and night, and we are hoping that by the end of the year the electricity situation will favour us considerably.

“The university is a universal place where students would be working throughout the day and throughout the night. But we spend a lot of money on diesel. By 6pm we switch off the diesel generator and the whole campus becomes empty.

“But the electricity project that the government is doing will transform the place more. The government came to flag it off recently, and it was an achievement, a big step forward that we appreciate immensely.

“In two and a half months, we buy 33,000litres of diesel, costing between N8m and 8.5million. We put on the light by 8oclock and we put it off between 6pm and 6.30pm. But when we have major things like the ongoing accreditation, we put it on as early as 7am and we cannot put it off until around 9pm.”

A buzz that the school made at a time was that it would be a major centre for entrepreneurship, so that the students would be able to stand on their feet on graduation, and not join the army of unemployed in the society but would be a new breed of graduates with a different orientation.

This was once a celebrated aspect of the school, with the promise of it being a new kind of university, offering a different package for the training of the leaders of tomorrow.

Part of the interdisciplinary academic centres established in school is the Centre for Entrepreneurship and Leadership Training which reportedly used to provide 21 vocational training for the students once a week, which is an accent to the focus of the school.

Former Vice Chancellor of the University, Professor Tolu Odugbemi, at the end of his tenure in 2015, said in an interview that the ultimate aim of the centre is to inculcate practical training skills in our students to make them job creators and positive contributors to socio-economic and political lives of the state and Nigeria at large.

“At the centre, the students are exposed to over 21 skill trainings; and every Wednesday after two o clock has been made lecture free period to enable them learn any vocational skill and trade of their choice.

“Such training include bakery and confectionery, beads production, drum making, tie and dye production, weaving and production of ‘Aso oke’, sculptural works, welding metal and fabrication, bottled and sachet water production etc. The University farms too have been stocked with various poultry products, fish, pigs, goats and other cash crops to give practical agricultural trainings to the students.”

But this lofty entrepreneurial dream for the school seems to have hit a rock. In an interview with current OSUSTECH VC, Prof Ogunduyile, he revealed that the centre for entrepreneurship was moribund and all equipment there dead until recently.

His words: “We are just raising it up. That site was dead. The last Council employed a manager for the entrepreneurial activities that were dead when we arrived. They were not working. We met so many machines that were dead, and we didn’t have enough money to give to the man to work.

“With the little we were able to give him, he resuscitated the bakery and then the water factories. So those are the two things he produces. The man is coming up and the place is also coming too.”

It would be recalled that some furore was generated last year when the fees charged by the Ondo state owned universities were increased.

The Vice chancellor revealed how OSUSTECH was able to effect the change without much of a crises.

He said: “We tried as much as possible to reduce the problems that are associated with fees. Last year, we started Engineering and Agriculture faculties. We increased the school fees of those coming in then, and we clearly put the amount on our website, and it was only applicable to 100 level, they will graduate with that fee, with that increase.

“But we did not extend it to 200 level and above. It was specifically mentioned that if you are coming in this is what you are going to pay. And that helped us. We did not have crisis because they have been told earlier.

“Now that those in 100 level are going to 200 level, they will continue with the new rate, while those in 300 level and above will maintain their old rate and gradually all the levels will be covered. We did not extend it to all the levels to reduce crisis.”

He believes that what could radically change the story of the school is if the plethora of the projects that are ongoing were completed.

“Government contributed the road for us which has actually brought tremendous access to the university. But we need support with those uncompleted buildings.

“We have all these projects that were uncompleted, which were started before this government came into being. You know Library is very important for accreditation; the library is still under construction. The administrative block is also important and then the lecture theatres. Even if the government completes just three of them for now, it will lift that university into a higher realm. We need to have the buildings completed.

“We don’t have any hostel at all. OSOPADEC and NDDC started their hostels but they are yet to come back after a very long time. And it has remained uncompleted. The hostel contributes to the academic culture of every university. Those things are not there, but our governor has promised us that he is going to make the place unique. We are hoping that all these will come to be.

“But with those things I have mentioned, accommodation, uncompleted buildings, electricity, and all the rest, about 17 projects, even if it is five that are completed now, you will not believe that that is OSUSTECH again, but the government has promised us that it will do it. We pray that God will grant them all that it takes to make that university a better place.”

While reacting to the question on the progress that have been made since a visitation panel was set up on the school by the state government, he said that the white paper, which contains the response of the government to the different proposals, has been sent to the university.

“The white paper was released and it took note of some many things. It was okay. In the white paper most of the items were ‘accepted’ and ‘noted.’ It mentioned the projects and encouraged them to complete them on time, and government accepted. It also noted the fact that more staff should be recruited. Nothing abnormal.”

The Professor, mentioned the fact that a sore need of the school is increase in staffing. He is really feeling this as accreditation panels from the Nigerian University Commission are in the school for some weeks, and some are still there by the time you are reading this doing the due diligence to ensure that the different departments in the school are on a sound footing and adjudged as meeting the minimum requirement for their effective functioning. The number of staff is a big part of the accreditation process.

He said that more lecturers are needed “to make the programmes more viable. More lecturers should be employed. We are going to do the employment but their salaries, you know, not that we cannot employ, but we need the backing of government to employ.”

He said the visitation panel will end their work in the school “around November 13, it is when NUC now communicates their findings to us that we can know the total outcome.

“The governing council is going to meet with our governor on this issue of staffing. We received support from government and we are hoping that the staffing situation will improve. With the support they gave to us towards this accreditation, we were able to procure some major facilities. And we have been doing what is good enough to make us pass. The support is highly appreciated,” he added.