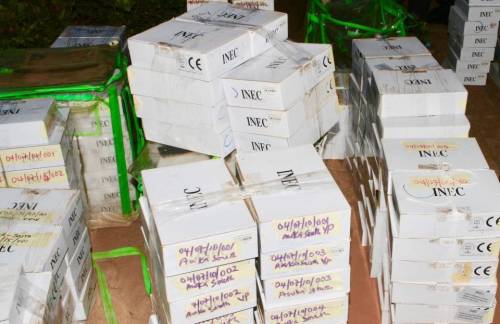 The Independent National Electoral Commission, (INEC) in Osun State has said that more than four hundred thousand and five hundred  and eighty (400,580) Permanent Voters’ Cards (PVCS) were still with the Commission.

The Public Relations Officer of the Commission, Oluwaseun Oshimosun disclosed this in Osogbo, Osun State capital.

Oshimosun stated that  INEC offices in all the Local Governments and Development Councils Areas were open 24 hours for residents in the state to collect their voters cards as general elections draw near.

She said that the Commission is doing everything possible to make sure that the people who are yet to collect their PVCs do so before the election.

Oshimosun added that the Commission had already taken the PVCs closer to the residents, urging those who are yet to collect their own to visit their registration area to collect it.

According to her, “In Osun State, a lot of people have collected their Permanent Voters Cards, and people are still collecting, while more people are yet to collect. We have 400,580 PVCs yet to be collected in Osun state.

“INEC is trying to bring it closer to the people and that is why we have moved to  registration areas and ward level, and more people are coming out to collect. The fact that they know their votes will count, they are interested in collecting the PVC.

“The total number of uncollected PVCs as of this morning is 400, 580 and that is to tell you that it is reducing gradually. We have over 2million registered voters in Osun State.

“INEC has done very well in Osun State because if you remove the number of those who have collected from the total , it clearly shows that those who collected are more.”

While calling on those who are yet to collect to do so before the expiration of the extended date she hinted that it is their right to collect their PVC and use it to vote a candidate of their choice just as she promised that INEC officials are there to serve them better.