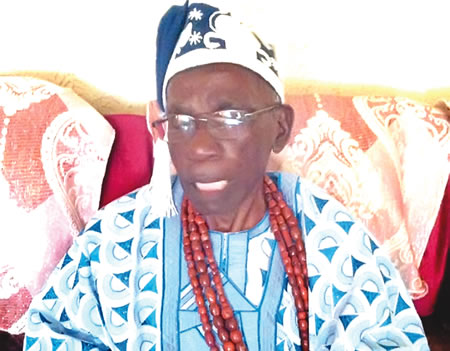 By Jimoh Ahmed, Ikare Akoko
|
The Owa-Ale of Ikare-Akoko, Oba S.K.A Adedoyin, has called on the Federal Government to a s a matter of urgency, put in place state police, so as to reduce the incessant crime cases in the communities across the state.

Speaking with The Hope Metro on the recent gruesome  killings in the town, the monarch used the incident to justify his persistent calls for  state police.

He said, “It is rather unfortunate and anathema to Ikare people which must be condemned in its entirety and I hope the law enforcement agency will see to the root of the matter”.

The monarch stated that state police is the only way the security of lives and property can be ensured.

“There are many advantages of state police known as community policing in some societies. A policeman is  supposed to know the nooks and crannies of his society as well as the people of the area”.

“So if you bring someone from Kaura Namoda or Port Harcourt who doesn’t know the terrain of this area or even speak the language, policing effectively would be difficult for such a person”.

He added that police recruitment should be decentralized and localized.

“In the western world, police don’t have settlements, they live among the people, they know who are the criminals within, but here, they fence an area and call it police barrack, how will officers know the terrain of the community they are policing

“Although some people are of the opinion that politicians may abuse their usage, or misused them, especially for election purposes, but one have to weigh the advantages vis a viz the disadvantages. Gone are the 60s when the social and educational system are low compared to now where you have an average of three graduates in a family, so people now tends to know their right”.