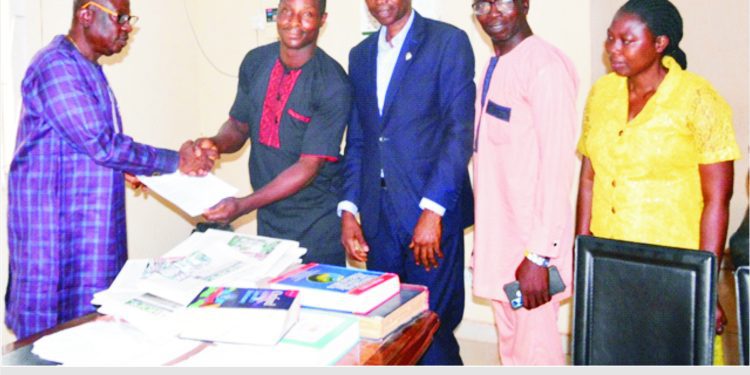 In appreciation of his efforts in rebranding The Hope Newspaper, Chairman/Editor-in-Chief of the company, Sir Ademola Adetula was yesterday honoured with a commendation letter by the leadership of Nigeria Union of Journalists, NUJ, Owena Press Chapel.

Presenting the letter, Chairman of the NUJ in the chapel, Adekola Afolabi said Adetula disposition and interest in the development of the company and welfare of staff is unprecedented and lauded him for being a caring father.

He said the chairman’s laudable ideas and initiatives have rebranded the state owned newspaper with attendant positive results.

“Your unwavering commitment to facelift the company and the improvement in the welfare of staff since you assumed the leadership of Owena Press Limited is worthy of note. Under your able leadership, the outstanding gratuities of retirees running into several millions of naira have been cleared. This is a laudable feat none of your predecessors was able to achieve.”

“We want it to be on record that this is the first time the NUJ in the history of this company will be presenting a letter of commendation to any Chief Executive,” he said.

We have promised to continue in giving our best and necessary support to further uplift the organization. We, however, appeal to you to do more in the welfare of staff as regards promotions to the deserving staff to further serve as morale booster.”

Responding, Sir Adetula who appreciated the union for the gesture assured that he will not relent in his efforts to leave the company better than he met it.

He promised not to embezzle the company’s money and to be transparent in all his dealings, so that he could leave the company with his integrity intact.

He commended the leadership of the union for allowing peace to reign in the company, saying no development can thrive in a crisis environment.

On the welfare of staff, Adetula assured that Owena Press Limited Staff will get what they are entitled to including annual increments and promotion to deserving staff.

He however enjoined the leadership of the union to call its lazy and errant members to order.