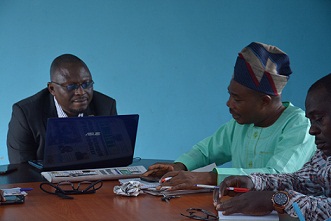 The role of the Nigeria media is to ensure that the  legislature, executive and judicial arms of government are accountable to the people.

Mr. Sola Imoru, Special Adviser (Communication) to the Governor  of Osun State, stated this at a seminar for Editorial Board members of Owena Press Limited, Publisher of The Hope newspaper  during the week.

Imoru, who is  also a former Editorial Board member at Punch newspapers, said the media perform this role through reportage of government activities.

He said another way the media perform its  role was through the editorial component.

Imoru said the editorial page is the voice of a newspaper on critical local, national and international issues.

He  said that the editorial component of a newspaper sets agenda for the government, criticises unpopular government decisions, extols good government policies and draws government attention to issues of local, national and international importance.

He said the editorial component also commends outstanding contributions of  individuals, groups  to the society, writes about memorable events and addresses issues that require urgency.

A newspaper, according to Imoru is unapologetic about its vision as long as it  allied to the  policy of  the news organ.

Imoru warned that a deviation from the vision of a newspaper could affect its appeal and ultimately its  sales, as readers were sensitive to a newspaper’s publications contradicting its credo.

He advised editorial board members of Owena Press to have those at the back of their  mind when carrying our their duties, and  be painstaking with their research.

The Editor-In-Chief of Owena Press Limited, Sir Ademola Adetula, welcomed Imoru to the  seminar, saying he had no doubt that Imoru’s various experiences would be invaluable to Owena Press editorial  board.

The Chairman of the Editorial Board of Owena Press, Dr. Gbenga Abimbola, also welcomed Imoru, saying his contribution would be important.