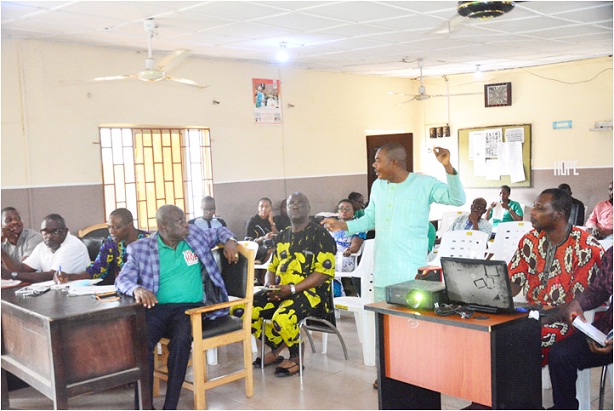 There is, obviously, no end to learning, as everyday presents before man something new to learn. No wonder, an adage says that learning never exhausts the mind. As a matter of fact, a particular school of thought says that we start dying the day we stop learning.

It was another opportunity to unlearn and relearn for the editorial staff of Owena Press Limited Akure, publisher of The Hope Newspaper, as they gathered for a refresher training on Friday February 18, 2022. Giving his opening remarks, the Chairman and Editor-in-Chief of the organisation, Sir Ademola Adetula, described the training as a retreat among The Hope family.

Sir Adetula started by going down the memory lane to talk about how the newspaper had moved from grass to grace. The Editor-in-Chief noted that within the last three years, through diligence and investments in the training of staff, The Hope had grown to become a household name in the state.

He said: “Three years down the line, we can look back and give God all the glory. We have changed the outlook of Owena Press Limited. In Ondo State today, people can’t ignore our newspaper. We have restored hope to The Hope.”

As a prelude to the training, the chief helmsman stressed the need for staff to help one another, so that everyone would grow on the job. His words: “Our training today will focus on common errors in the media, but before that we are going to look at how we can help one another. Some of us are strong, while others are weak. If you know your weakness, you can ask your colleague who knows better to lend a helping hand. I want all of us to work together as a team by helping one another in one way or the other, “ he added.

While stressing that constant errors could strip a newspaper of its credibility, Sir Adetula assured the participants that the essence of the training was not to humiliate anybody but to help learn and be better.

He said: “The purpose of coming here is to learn. Journalism is dynamic. To be relevant, you must be informed and the only way to be informed is to keep learning.”

The seasoned veteran equally emphasised the importance of reading to the career of a journalist. He encouraged everybody present to develop a vibrant reading culture. He said: “I want to counsel that as we step out of this training, everyone should develop a reading culture. You don’t lose anything by reading. Read all the time. When you read, you know better. Read when the opportunity presents itself.”

After his opening remarks, the chairman handed over to the resource persons. Each training session was followed by questions, observations and suggestions. The first speaker was Dr Raphael Abimbola, a former reporter and News Editor of The Hope. He is currently a lecturer at the Department of Mass Communication, Adekunle Ajasin University, Akungba-Akoko. He is also the Chairman of the Editorial Board, Owena Press Limited.

Dr Abimbola’s lecture centred on media writing skills, characteristics, news reporting, language and style basics. Under media writing skills and characteristics, he started with a lesson on AP style or guidelines for writing numbers. In his words, “AP is an American English grammar style and usage guide created by American journalists working with or connected with the Associated Press.”

He spoke on knowledge of grammar and punctuation, ability to simplify information and focus on accuracy and details. He also stressed the need for objectivity and clarity. He said: “Some professionals believe that objectivity in journalism does not exist, because humans are innately biased creatures. However, media professionals should aspire to absolute objectivity.”

He added that media practitioners write for a large mainstream audience. Therefore, it is better for a journalist to get his points across to the audience through simple and short sentences, instead of the complex sentences and jargon found in academic writings.

While talking about news reporting language and style basics, the seasoned media scholar explained further the need for short, sharp and clear sentences. He also gave a brief lecture on sentence length.

He concluded by addressing repetitions, accuracy and grammatical slips, using excerpts from The Hope as examples.

The second guest lecturer was Professor Busuyi Mekusi from the Department of English and Literary Studies, Adekunle Ajasin University. He suggested that the management of Owena Press Limited should document the house style and common errors that had been noted and corrected, and make them available for the staff.

Professor Mekusi delved into lexis and structure, explaining the use of some nouns and verbs in sentences, saying: “Some nouns can be pluralised by simply adding ‘s’. An example is ‘boy’ that has ‘boys’ as its plural. However, some nouns are generic and do not carry ‘s’. Examples are the poor and the police.”

The professor of Literature who is also a member of the The Hope Editorial Board clarified the proper form of expressing tenses for some actions, saying: “When you say ‘I used to be very shy’, it means you are no longer shy. On the other hand, saying ‘I used to be very friendly’ will make your audience take some steps backward from you because it means that you are no longer friendly.”

Drawing examples from various sentences, the seasoned writer noted that English language is governed by well laid down rules due to the need for mutual intelligibility.

While noting that English language has parts of speech that all complement one another, Professor Mekusi equally shed more light on the proper use of tenses. He said: “If I say ‘Olu killed a goat yesterday’, that means the action was concluded in the past. However, if I say ‘I go to school everyday’, that means it is something I do habitually.”

While differentiating between regular and irregular verbs, Professor Mekusi stated that the only way to master them was to learn as many of such verbs as possible from the dictionary. The literary giant further counseled his audience by saying: “When you find yourself in a situation where you don’t know the right word to use, simply reorder your sentence in a way that allows you to use what you are sure of.”

While suggesting that everyone covering a beat should make himself familiar with that beat, Professor Mekusi also highlighted some mistakes in one of the past editions of the newspaper, which he corrected.

In the concluding part of his lecture, Professor Mekusi admonished his audience to read their write-ups loud after writing, as that would help to check the accuracy of some punctuation marks used in the write-ups.

At the end of his lecture, the management and staff of the organisation held an in-house meeting where suggestions that could lead to the progress of the newspaper and the development of staff were raised and discussed.