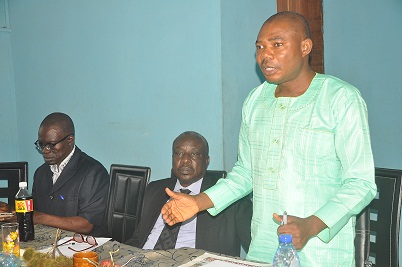 By Mary Agidi
|
For  several hours yesterday, journalists at Owena Press Limited took time off their editorial hustling to horn their skills.

It was a new dawn for the journalists as their facilitators grilled them  on the new information order, language use, photo editing and the new editorial direction of The Hope newspaper.

In an opening remarks at the event, the chairman of Owena Press Limited, publishers of The Hope newspaper,  Sir Ademola Adetula, said the training programme was designed to sharpen the professional skills of the editorial staff who are the intellectual power house of the newspaper.

Adetula said despite the obvious problems of the company,  he would ensure that the company returned to prosperity and its glorious era.

“It behooves on us to respond quickly to the changing dynamics of the market space through up to date training and investments in modern equipment so that we do not go extinct in the face of global pressures on our organisation.

“This is the future that beckons on us and I have no doubt about our capability to respond to the challenges posed by the new media.

“Needless to remind you that the economic space is shrinking and the media industry is facing greater threats from bloggers and social media.”

Also speaking on story and feature writing, the Chief Press Secretary to the Ondo State Governor, Chief Segun Ajiboye charged the journalists to continually improve in their skills as writer, saying one’s work is what will speak for him or her in future.

He urged them to be diligent and perform any assignment given to them as if someone somewhere is watching.

The CPS told the participants to uphold professional confidence by not being subservient but to show professional diligence and independence while discharging their duties.

A don in the department of Mass Communication, Adekunle Ajasin University, Akungba Akoko, Dr Gbenga Abimbola, who spoke on language use in today’s media advised the participants to be reader-focused which he described as the best form of writing.

Also he counseled the participants to display courage in their journalism  endeavours by being truthful and ethical.

On his part, Mr Fisayo Falodi who talked on caption writing said to maintain readership, there is a need for photographs to be correctly captioned, noting that a poorly written caption will mislead and also diminish the purpose of the photographs.

Present at the training programme were the Acting Editor, Mr Akin Adubuola who thanked the facilitators for their educative lectures.