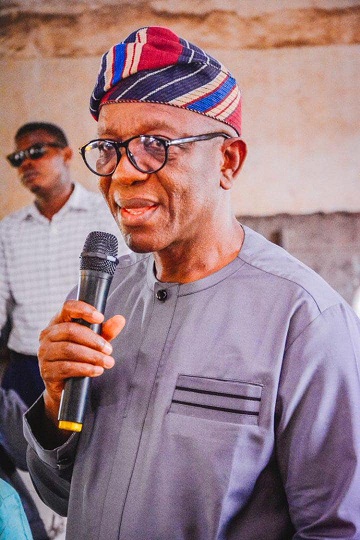 Victims and families of the deceased of the June 5 attack on St Francis Catholic Church, Owaluwa in Owo, were full of praises to the state government and well meaning Nigerians who came to their rescue by donating money.

The victims who appreciated the gesture of the government and the donors while recounting their ordeals said their lives have not remained the same since the day the incident occured.

They, however, said the assistance has given them hope.

One of the victims, Onuoha Chinedu, a Corps member who lost both parents narrated his ordeal:”I was in the church on that Sunday and I thank God for saving my life. This assistance will go a long way to ameliorate our plights . I wish to appreciate the State Government for what it has done thus far, and for the fatherly love.

“It shows that we have a government that has sympathy for citizens, and everyone involved in the incident. I also thank the Catholic Church for everything they have done.”

Omodara Feyidupe, who lost her brother, Obuche Krummale to the attack, commended the government for the timely intervention since the incident happened.

She said when her grandmother whom the deceased was taking care of heard of his demise, she had heart attack and died. “The package given to us is well appreciated. The efforts of the Committee set up by State Government led by Commissioner for Finance, Wale Akinterinwa has done well,” she added.

On his part, Ngozika Onyeke, who lost her husband, Onyebuchi Onyeke, and Lawrence Nzelu, who lost his wife, Stella Nzelu, during the attack expressed gratitude to the government, saying the kind gesture has given them hope.

Other victims including Idoko Ofoma, who survived the incident with his wife and five children appreciated government for reaching out to them.

Presenting the cash donation to the victims, a member of the Management Committee who is also the Special Adviser to the Governor on Union Matters and Special Duties, Mr Dare Aragbaiye, explained that the committee will come back from time to time to disburse more money to the victims and particularly the deceased families as soon as more funds get to purse created for the purpose by government.

He disclosed that the State government has disbursed several millions of naira to the families of the deceased and victims of the June 5 incident since last Tuesday.

Aragbaiye, who was in company of some other committee members, noted that the cash donation would assist the beneficiaries to overcome the trauma, both physical and psychological.

He particularly appreciated Governor  Akeredolu for his prompt response to assist the victims.

“Since the incident happened on June 5, Mr Governor has been on this matter, particularly on the need to bring succour to the families whose loved ones were killed in the incident and also to the injured, some of whom are still visiting the hospitals for treatments and follow-ups.

“In order not to delay this support meant for them, Mr Governor directed that a reasonable amount of money be given to each of them. Each of the families and each of the injured, and that is precisely what we have done.

“I believe that this will go a long way in bringing relief to the victims. The incident was unfortunate but to the glory of God, many still survived. And many of the relatives of those who died also need support.

“So, what the Governor has done will assist them to overcome the trauma, both physical and psychological. We were here on Tuesday and we have come here again on Thursday to conclude the first round of the exercise.

“We believe that as more money comes into the purse which the state government has created for this purpose, we will also be coming back from time to time to disburse more money. Aragbaiye stressed.