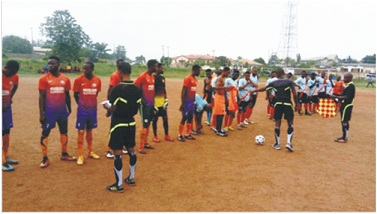 By Femi Atolagbe
|
Owo Pillars FC will slug it out with Akoko United FC in the final match of the ongoing Otunba Tajudeen Akinyemi Easter Competition Cup that will be played at the Ondo State Sports complex in Akure, on 28, April by 4pm.

Owo Pillars had eliminated OSOPADEC 3- 2 in a penalty shootout of the first semi final decided at the Ijapo Housing field, Akure, after the regulation time had ended 1-1 draw.

After a barren draw in the regulation time of the second semi final of the day, Akoko United FC knocked  Ekimogun FC out by 3-1 via  penalty shootout.

During an interview with newsmen, Chairman  Ondo State Football Agency, Otunba Tajudeen Akinyemi thanked the organiser of the competition, Kunle Tuface Football Promotion for putting this type of competition together in the state.

He noted that if we have three of this grassroots competition in the state in a year, there won’t be any reason for scouting and buying players from outside the state.

According to him, “we will make this competition a yearly one mainly for the purpose of discovering new talents at the grassroots that will do the state proud in future.

His words”, I’m happy for what I have seen here so far, the talented and  exceptional players from this competition will surely join the state team, some will join the Rising stars while the experienced among them will join the senior team (Sunshine Stars).

God has helped us through this competition, without a grassroots competition of this nature, we wouldn’t have seen these talents, they would have been hidden somewhere without anybody discovering these Gods gifts deposited in them .

The Chairman and the Coordinator of the organising committee of the competition, Comrade Ayokunle Oluwatope described the game as just the beginning of good things to happen in the Sunshine State in terms of sports.

“We will continue to dig deep to harness the talent abound in the grassroot for the glory of our state and the country at large”,he noted.