Owo to celebrate 1000 years of existence 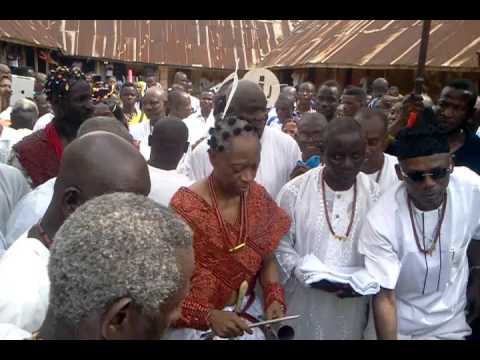 From Jimoh Ahmed, Ikare Akoko.
|
Owo, the headquarters of Owo Local Government area of Ondo State will celebrate its 1000 years of existence this year.

The Olowo of Owo, Oba Victor Folagbade Olateru-Olagbegi III, made this disclosure during the visit of Nigera’s Vice President, Prof. Yemi Osinbajo to his palace.

Oba Folagbade said Owo was founded some one thousand years ago and hopefully, this will be celebrated this year.

The monarch disclosed that the town was pronounced a native authority in 1918 during the last year of the amalgamation period.

According to him, the town shared boundary with Akure, Kabba and Benin which spanned nine local governments if this measure should be used then.

” In 1918, there was an  ordinance, that made Owo a single Native Authority sharing boundaries with Akure, Kabba and Benin, spanning eight or nine local governments if this measure should be used, but today, we are only left with two local governments, Owo and Ose”.

The Olowo appealed to the Federal Government to make good its pronouncement that made the palace of Olowo a national monument.

Similarly, Oba Folagbade called for the establishment of a Federal Technical University in Owo, since the only federal government presence in the town is the Federal Medical Centre (FMC).