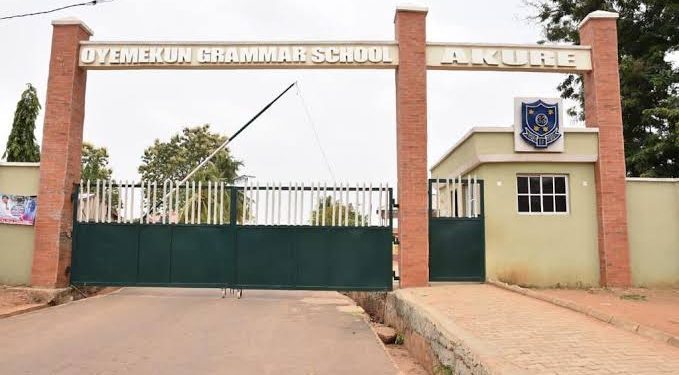 Old Students Association of Oyemekun Grammar School, Akure has cleared the air on the ownership of the school.

According to the old students, Oyemekun Grammar School is owned by stakeholders comprising of Akure Anglican Communion, Akure Community, Alumni and the Parents Teachers Association, PTA.

They made this known during a press briefing as part of events outlined to mark the 70th year Anniversary of the school on Wednesday.

There had been crisis of ownership of one of the foremost secondary school by the Diocese of Akure Anglican Communion and the Akure Community.

The ownership crisis was as a result of the state government plans to return some schools to its original owners.

Ondo State Government had earlier returned some secondary schools to the Catholic Church.

Fielding questions from journalists, the National Vice President of the Association, High Chief Olusegun Ogunjobi noted that, though the school is owned and financed by the government, it is in the process of handling back its ownership to stakeholders.

“Though we are not in the position to contest the ownership of Oyemekun Grammar School, but the fact is that the school is owned by the government.

“The school was founded on January 1953 and was taken over by the government in 1976, now the government has deemed it fit to hand over its ownership back to stakeholders and we are already on the process of doing this.

“Stakeholders here includes the community, the alumni and the PTA. As alumni, our major concern is not about who owns the school, all we are after is the progress and development of the school and if you look at what we are doing, it is towards the advancement of the school.

“We are trying to bridge the gap particularly on infrastructural development, this is the little we are doing to contribute our quota and if the government is saying they want to hand over the school, we will be much happy with this development and we are already in the process of doing this with several meetings.

Highlights of programme of events to commemorate the 70th anniversary include; road show, career talk, novelty match between Oyemekun Grammar School and Aquinas Students, commissioning of projects built by the alumni, homage to Deji, presentation of awards to staff and students, amongst others,

Speaking on the entire sum spent on projects to be commissioned, the project manager of the association, Alhaji Yusuf Idowu noted that total amount of N55.6 million has been expended on the various projects so far stressing that all projects are done on the basis of direct labor and not awarded to contractor(s).

“As part of the programs outlined for this anniversary, we shall be commissioning various projects built by this present administration.

“Some of which includes; the new principal’s administrative block, the volley ball court, the longest block opposite the admin block, the school canteen among others.

“Some if these projects are still under construction and it may not be easy to give the exact amount spent so far but in aggregate, we have spent N55.6million in all.