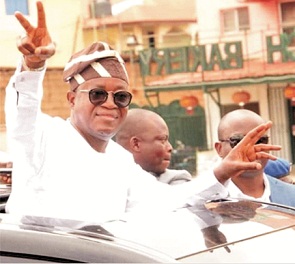 From Fisayo Akinduro, Osogbo
|
Osogbo, the Osun State capital was agog on Friday after the Supreme Court affirmed Governor Gboyega Oyetola as the winner of the September 2018 Governorship Election.

The outcome which was challenged in the court by the Peoples Democratic Party, PDP, and its candidate, Senator Ademola Adeleke was finally laid to rest after nine months of legal battle.

The election which according to the PDP was marred with irregularities and violence was dismissed by the Justices of the Supreme Court chaired by the Acting Chief Justice of Nigeria, Ibrahim Tanko Muhammad in a split judgment of five to two members of the panel.

It will be recalled that the tribunal on March 22, 2019 declared Adeleke winner of the last year’s election but was appealed by the All Progressives Congress, APC, at the appellate court which dismissed the verdict of the tribunal on May 9, 2019.

The apex court in a split decision of five to two members of the panel agreed substantially with the Court of Appeal which ruled that a majority judgment delivered at the tribunal was a nullity.

The court held that the judge who read the majority judgment at the Election Tribunal, Justice Peter Obiora, was evidently absent on February 6, 2019, following the documents before the court. It agreed with the Appeal Court that the absence of Justice Obiora when a key witness in the petition was heard has rendered the judgment of the trial tribunal a nullity.

Justice Bode Rhodes-Vivour, who delivered the majority judgment, supported by other four of the seven justices of the apex court panel held that it was a settled law that when the rightly constituted panel of a court did not seat, the activities carried out by that panel was a nullity.

Justices Kumai Akaahs and Paul Galinje in their minority judgment affirmed the tribunal’s judgment which declared PDP as the winner of the poll and held that the Independent National Electoral Commission (INEC) in an election ought to remain an unbias umpire.

Akaahs said even as INEC erred in law by relying on its manual to cancel some aspects of the election, the applicant still met the constitutional requirements of having the highest votes cast.

But after the judgment in favour of Governor Gboyega Oyetola, his supporters and party faithful trooped out in large numbers to celebrate with him, an act which grounded vehicular movement in Osogbo for several hours.

Various groups in their uniforms carried the party’s and Ileri Oluwa flags in a procession from the Government House, Oke Fia to orita Olaiya down to Nelson Mandela Freedom Park chanted the slogan of the governor which says “Ileri Oluwa ti se” meaning the promises of God has been fulfilled.

The crowd despite the rain danced as members of the Osun Youths Empowerment Scheme, OYES, with their motorcycles displayed to add glamour to the celebration.

The celebration which cut across some major villages in the state recorded huge turn out as no violence or protest was recorded.

The governor while expressing happiness about the verdict, dedicated the victory to God and the entire people of the state for joining him in navigating the twists and turns of the road to justice.

He said the reaffirmation of his election victory by the Supreme Court was a call to work harder to deliver on his promises to the people.

Oyetola said since the matters of the last governorship election had been laid to rest by the courts, all stakeholders should come together to move the state forward.

“It is time to move forward. I extend hands of friendship to the opposition. We are all Omoluabi. I will focus on security, peoples’ welfare, especially women.

“We will work even harder to deliver on our campaign promises to you and to take the state to the next level.”

The governor added: “I commend the Judiciary for a renewed hope and for proving to us that it remains the last hope of the common man.

“This is a victory for democracy, victory for good governance and victory for the masses as this verdict reaffirmed my victory in the governorship election.

“We will continue to see the mandate freely and willingly given to us by our people as an opportunity to serve and lift our state to the greater heights”.

In his victory message to the people of the state, former governor, Ogbeni Rauf Aregbesola applauded the efforts of all and sundry for their loyalty throughout the Court rulings.

He admonished people of the state to support the governor in order to actualize his dream of uplifting the state.

He also charged party faithful to consolidate among themselves for the betterment of all.

Similarly, the Speaker of the State House of Assembly, Mr Timothy Owoeye congratulated Governor Oyetola, and the entire members of the All Progressives Congress over the victory.

He described the judgment as a confirmation of the people’s mandate which was freely given to Oyetola and the party.

The Speaker commended the Supreme Court panel for their braveness and uprightness in the face of intimidation and campaign of calumny earlier embarked upon by the opposition party to get favourable judgment from the apex court.

Owoeye also commended the legal teams of the All Progressives Congress, the Independent National Electoral Commission (INEC) and that of Oyetola for the thorough job and sacrifice they put into the  legal fireworks while it lasted.

The Osun State chapter of the All Progressives Congress  dedicated the Supreme Court judgement to God, describing the outcome as prayers answered.

The Director Research, Strategy and Publicity of the APC, Mr Kunle Oyatomi  while reacting to the verdict said, “The Progressive God that Osun people serve heard their prayers and granted their request. “God has used the highest legal authority of the land to proclaim the truth that Oyetola lawfully won and that is historic.

“Providence has by this verdict, put a stamp of approval on the exceptional developments achieved in the state during the last eight years.

“Thank God, we are not mourning, neither are we mocking the opposition. We are simply telling them that now is the time to change and move on to become a factor for good in Osun’s politics.”

An elder statesman, Chief Abiola Ogundokun has charged Governor Oyetola to see his victory as an act of prayers answered.

He noted that nobody trades with God and record any loss. “The campaign slogan of Oyetola is Ileri Oluwa literally translates to promise of God.

He urged residents of the state to team up with his administration to chart the course of more progress for the progressive government.

“The required leadership qualities to effectively paddle the canoe of the state to a successful berth is embedded in the gentlemanly statesman characteristic of Oyetola. This, he said should be looked at as part of the reasons to give unflinching support to his administration.”

The elder statesman appealed to Oyetola to forget all the litigation distractions and concentrate on his pursuit of humanitarian policies and programmes which he has demonstrated in his provision of infrastructural facilities and health interventions since his coming to power.

Also, Osun Concerned Citizens, a socio-political group, has described the judgment as a victory for democracy and justice.

Mr Yaya Ademola, the General Secretary of the group, said now that the legal battle was over, Oyetola should be magnanimous in victory and make use of the best hands, irrespective of political party affiliation.

“The vanquished should make themselves available for the bigger project of Osun development while preparing for future elections.

Also speaking, a former member of the State House of Assembly, Mr Kamil Oyedele said the Supreme Court judgment was a victory for democracy.

Oyedele said it was now clear that Oyetola won the election, adding that the opposition party should support the governor in moving the state forward.

However, the PDP candidate in the election, Senator Ademola Adeleke has congratulated Governor Oyetola on his victory at the Supreme Court noting that his ambition to become the governor of the state was never a do or die affair.

Adeleke said the judgement of the Supreme Court, being the apex court in the land, “regardless of my disagreement and disappointment, remains final.”

“As a democrat and law abiding citizen, I accept the ruling no matter my misgiving. I wish Governor Oyetola well in the governance of Osun state.”

Also, the Peoples Democratic Party in the state said it has accepted the Supreme Court judgement which he said cannot be appealed anymore.

“The court has ruled and we don’t have anything to say than to accept the verdict since there is nowhere to go again,” Adagunodo said.

He, however, appealed to party members to be calm and peaceful.