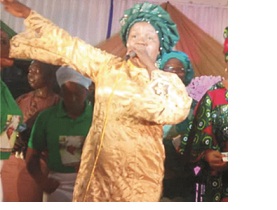 By Bamidele Kolawole
|
People of Akure metropolis and outside the State  attended a concert organised by Evangelist Helen Oyeyemi, where she led her fans and some ministers of God to offer a sacrifice of praise to the maker of life in a new element.

The concert with the theme” Victorious Praise was held at the  CAC Oke Isegun Hall, Irowo Street, Akure and attended by many prominent people in the society.

Oyeyemi said that her aim was to restore those people that have gone astray back to God through her inspirational songs and to make heaven at the end of her race on this earth.

The artiste while speaking with Friday Extravaganza, said her passion for music has given her opportunities to wine and dine with kings

The GOMAN chairperson, Ifedore Local Government in Akure South, noted that the love she has for music has no end saying that she would sing till she stop breathing.

The artiste who has been singing since her tender age, but professionally 12 years, said that she counted all her challenges as strength to do exploits.

During her ministration, the artiste carried her fans and the ministers of God that were present in the hall to the high place of praise as everyone danced to her music as they were very excited when she was ministering

According to her, It was tough when she started singing, added that it was God that sustained her and still at work and things began to change for her gradually.

She revealed that she has been able to produce four albums titled Apanla, Erin Ayo, Ologbon Wundia and Happy Home’ appreciated God who made the programme a success and everyone that came to attend the occasion, and prayed that they would be celebrated.

She urged gospel artistes to sing meaningful song that will make people think of heaven and to stop seeking for help else way, saying that it is only God that can announce someone that will not collect any bribe.

“I don’t no what to say, I’m short of words, It can only be God and I return all glory back to him. He alone deserves my praises. I’m happy today for the success of the concert”, she explained.

In his comment the chairman of the programme Elder G.O Omotosho, commended Oyeyemi that she is respectful and God fearing woman.