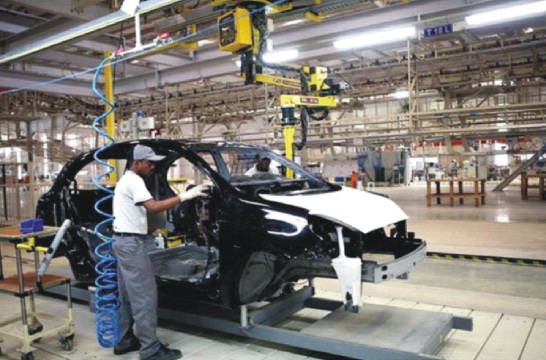 Peace Auto Assembly Plant in Enugu came into existence in 2016. Peace Mass Transit Ltd established it to assemble semi-knocked-down parts for buses for its transport sector  and public use. Three years later, the automobile plant preoccupies itself with merely assembling engines and parts of buses used by its affiliate company. Although the company stations its brand of buses, ‘Ugama Bus’, in the factory premises, they seemed to be the last set of buses available in the company.

Anambra Motor Manufacturing Company (ANAMMCO) used to be a beehive of activities in the years past. Through its 1977 agreement with  Chinese firm, Dongfeng Motor Corporation, it assembled Mercedes trucks for distribution within Nigeria.  Twenty five years later, a low patronage from the populace and the various levels of government in the country becomes the major challenge facing the company.

Steyr Motors Nigeria Limited, Bauchi, began assembling trucks, tractor and buses in the country in 1979. During its rosy days, Steyr Motors assembled 5,000 tractors, 2,000 trucks and 2,000 buses per year for the Nigerian market. Forty-three years after its establishment, the Nigeria/Austria automobile company suffers from paralysis, having ceased operating since 2007, due to the harsh environment in Nigeria.

Due to the harsh operating environment in Nigeria, Peace Assembly Plant, ANAMMCO, and Steyr either operate at epileptic level, or have ceased operations for good. In 2014, 28 plants began to assemble vehicles for distribution within Nigeria, manufacturing tractors and buses for the local market, creating employment for thousands of Nigerians, but only a few of these companies  operate eight years later, producing only 8,473 instead of  408,870 units yearly capacity target, according to data from National Automotive Design and Development Council (NADDC).

The problem hinges on the absence of a legal backing for auto assembling in Nigeria, said Chairman of Peace Transport, Dr Samuel Onyishi. The non-signing of the Nigeria Automobile Industry Development Plan (NAIDP) bill into law makes foreign investors feel it’s risky to invest in the Nigerian automobile environment, while local investors also hesitate about putting their money into an industry devoid of an enabling law, Onyishi said.

Unfortunately, Nigerians spent between N1.05 trillion and N1.2 trillion  on importation of used vehicles in 2012 and 2013, according to data from the National Bureau of Statistics (NBS). In 2014, the figures dropped to N36.7 billion and subsequently rose to N157.8 billion in 2015. The figure dropped to N105 billion in 2016 and one year after, it slumped further to N87 billion. But now, the import bill on used vehicles stands at N257.85 billion at the end of 2021.    The volume of import presupposes that Nigerians prefer the purchase of used vehicles to locally assembled ones.

Sadly, the Finance Act of 2020 introduced by the FG reduced import duty on fully-built vehicles to the same rate as Semi-Knocked Down components, making it difficult for local assemblers to compete with fully-built  vehicles’ importers/dealers, said Deputy Managing Director of CFAO Motors, Mr. Kunle Jaiyesimi. His company and others wasted millions of dollars in building world-class assembly plants for buses and trucks, but due to the challenge of the import duty and others, investors converted the plants to after-sale centres.

With after-sale centres taking over the place, hopes of investors in the local automobile sector dampened. They watched with chagrin as Nigerians continued to purchase  used vehicles instead of locally assembled ones. The frustration increased with the non-signing of the Nigeria Automobile Industry Development Plan (NAIDP) bill into law. The consequences proved grave, as investors turned elsewhere to pursue other means of making profits through the manufacture and sale of automobiles, and it didn’t matter if they conducted business in other places, since  there was no way they could compete with fully built vehicles coming into the country.

So now, more than 50 Nigerian manufacturing companies shut down work in the last five years, according to investigations by The PUNCH. Through time, Peugeot, Volkswagen, ANAMMCO and Leyland stopped production. For some of them to continue production, they moved to other countries such as Rwanda, Ghana, and others.

On June 27, 2018, Volkswagen started production of its vehicles in Rwanda. Several models came on board, with an initial target of 5,000 vehicles per year that the manufacturer intended for the modest local Rwandan market. Two Chinese automobile manufacturing firms namely Dongfeng Liuzhou Motor Co., Ltd. and Liuzhou Wuling Motor Co Ltd  in January 2022 added Rwanda to their large network, represented by Carcarbaba in Rwanda.

To woo these investors, the Ghana Automotive Development Policy (GADP) gave five and 10-years tax holidays for the importing semi-knocked down (SKD) and complete knock down (CKD) kits, respectively. Investors wishing to import materials and equipment to build the plants enjoy an exemption from duties and other charges. Through these initiatives, experts valued the Ghanaian automobile market at USD 4.60 billion in 2021, but it is now expected to reach USD 10.64 billion by 2027, registering a CAGR of 15% during the forecast period (2022-2027).

So while the automobile industry grows in countries such as Ghana and Rwanda, the industry in Nigeria verges on a collapse, with many foreign investors such as Peugeot moving away with their business.

Ordinarily, if the policy were protective enough, if the environment were friendly, if the infrastructure were there, the companies would have doubled with the multiplier effect of over 200 local plants, Abiona Babarinde, General Manager, Marketing and Corporate Communications, Coscharis Group, told The Guardian.  If that had happened, it means Nigerians would have more employment and more local content; it means the country saves forex and gives cheaper vehicles to Nigerians to drive, Babarinde said.

The country’s approved plants have the capacity to produce sufficient number of vehicles to cater for its immediate need only if there would be continuous patronage, duty and tax incentives, said Chief Executive Officer of  Nord Automobiles Limited, Oluwatobi Ajayi. Plants able to produce five vehicles per day could scale business and  increase the number to 25 vehicles with the right support and raise it to 50 per day with two shifts, he said.

Sadly, Nigeria on the part of the populace and the government refuses to provide the right support. So while Rwanda, Ghana, Kenya and other African countries enjoy what Nigeria lost, this country groans. So while Peace Auto Assembly came into existence in 2016, the Nigerian situation limits it to produce only engines and parts of buses used by its affiliate company. So while the automobile industry in nearby countries employ thousands of people, the automobile sector in Nigeria throws thousands of able-bodied youths into the ever-expanding labor market.