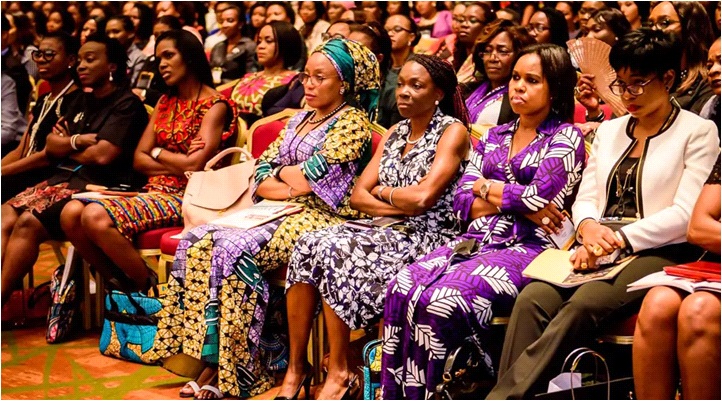 Over the years, women have been branded by definitions that kept them at the base of the ladder, dependent on men and society for validation of their womanhood.

It is not surprising to see that women go through a lot of challenges in our society today. A visit to rural communities will reveal the obvious about tedious jobs women subject themselves to, in order to feed their families and keep body and soul together.

Despite this, in some cultures, women do not have a say in the family affairs. The husband’s decision remains final, even when it is wrong. She dares not make contribution when the husband is talking; she is only meant to bear children and take care of the home. Take for instance, a working class woman faces a lot of tasks everyday, just to balance things up. She cooks for the family, does all the house chores and still performs  her duties as a wife to her husband, whereas her husband simply dresses up, takes his breakfast and leaves for work, only to return in the evening to eat and rest for the day.

Husbands helping their wives with house chores, especially when their children are still young, is considered a taboo in some communities. Women go through all these, giving little or no attention to their health.  Some women spoke with The Hope about the challenges they are facing in keeping the home running.

Mrs. Bola Umar, who does manual labour to feed her five children, said that coping had not been easy for her because her husband was not supportive. “I am not educated enough to afford me a white collar job but I have been doing my best since I got married to sustain my family. My husband who works as a gate keeper is not supportive because he is a drunkard. I go from one farm to the other to do manual labour, so that my children can eat.”

On how much she made per day, she said that it depended on the job’s nature. “If I am lucky to get house cleaning for a week, I will be fed by my employer and paid N3000 for the week. At times, I join labourers at building sites to carry sand for N4000 per day. Though it is not easy, I must do it because of my children. I cannot watch my children go hungry, and I don’t have family members whom I can turn to.”

Another woman who simply gave her name as Iya Ebere said that since she lost her husband six years ago, the burden of providing for her six children had been weighing her down. The woman who survives mainly by selling pap disclosed that she washed clothes for different people to augment whatever she makes from pap.

According to her, “I cannot be depending on others for survival. Though some kindhearted people are supporting me, it is not enough. Two of my children are in higher institution, paying their school fees is not easy. Since ASUU is on strike, they have engaged themselves in a daily job to get money so that the burden will be less. I am open to any legitimate work that can fetch me money.

The only consolation I have is that my two children in higher institution will soon be through. If not for the ASUU strike, they ought to be rounding off.  My church has been supporting me in a great measure which I will forever remain grateful for. They are indeed a family. If not for their support, things would have been very difficult.”

A young mother of two, Mrs Busola Abiodun, who works as a cleaner in a private school lamented that once the students were on holiday her salary was hardly paid promptly. The young woman who disclosed that she could not further her education after primary school due to the death of her parents said that her husband who is also a labourer is finding it difficult to provide for the home.

She said: “If I have my way, I don’t want to be a cleaner. The job is tasking and irritating for me but I have no choice. My husband is doing his best but not enough. He doesn’t get job everyday. Anytime he gets one, he is only paid N1,700 per day which is not sustainable with this economic situation.”

Asked why she could not go back to school, she said: “ The N13,000 monthly salary is not enough to cater for my children because my husband’s job is not reliable. I don’t think I can cope going back to school with high education fee, aside that of my two children. Women are seriously going through hard times. Women are the breadwinners in most homes today. They do odd jobs to fend for their families. Men capitalize on the belief that women are passionate about their children and abandon their responsibilities to them. At times, when my husband doesn’t have money for the family’s upkeep, I make sure that I provide for my children to eat by all means possible. Women are most affected by the present economy. We pray that things get better,” she said.

A single parent, Iya Aboy, who sells vegetables to fend for her four children also disclosed that what she made from the sales was not enough to meet her children’s needs. “I have not set my eyes on my husband for the past eight years. He complained before leaving that he did not have money to care for his family. He was working as an okada man before the okada got spoilt. I was told that he was in the village and I tried to call him. He picked the call and told me that he didn’t want to come to add to my burden.

“Two of my children will be starting secondary school in two weeks’ time. Even though they are going to public school, I still need to pay some money, buy them textbooks, chairs and lockers. All these cost money which I don’t know how to get. Coping as a single parent with four children for eight years is not easy at all. I shoulder all the responsibilities and do menial jobs to make sure my children are not hungry. I discussed my challenges with my husband’s family but none of them could help. I am still considering relocating to the village to join my husband because things are very hard for me,” she said.

An educationist, Mrs. Sola Olotin, who lamented the effects of the economy on women explained that one of the biggest challenges facing women is the stereotype and the societal perception imposed on us that we have to  act in a certain way to be real women. While the woman of the 21st century has leapt over hurdles of stereotypes, there still remain measures of restrictions that would take more than notes to overturn.

Her words: “There are some odd jobs women do to provide for their families. To me, it is as if some men have shifted their responsibilities to women. It is not surprising seeing women cleaning gutters, cutting grass and carrying loads for others to survive. You will want to ask if they were created for this? It is sad that women who should be pampered and treasured are now going through hell to feed their families. Most of them are those without good certificates. It is advisable for women to develop themselves. They should not let the society dictate to them. They should be well educated and be equipped. Gone are the days when women stayed at home as house wives. We have women in places of decision making. We have women who are leaders in different countries. Not that they should measure equality with their husbands but they should strive to put themselves in advantaged positions where they can be respected.

“Despite the fact that we have women who are breadwinners in most homes, gender stereotypes still exist and are transmitted through media, social, educational and recreational socialisation, which promotes gender prejudice and discrimination. It is so sad that the society fails to recognize the pains women are going through to keep their homes alive.  There was a time I saw some women at building site’s carrying cement and gravel, and I feared for their health.

“Yet, they have husbands and children. Women have been over stretched, all in the name of providing for their families. Despite this, some still experience marital violence. From violence and sexual abuse to gender pay gaps, career growths and restrictive reproductive rights. Undermining how the society is treating women, I will advise those who can, to upgrade themselves academically and never think less of themselves. Thank God that the society is recognising women’s roles now better than before. I am sure that we will get there one day,” she said.