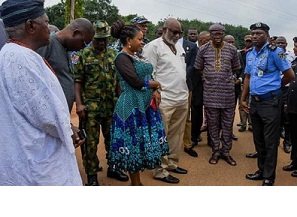 By Adekola Afolabi
|
The Panel of Inquiry set up by Ondo State governor, Arakunrin Oluwarotimi Akeredolu, to look into land dispute between Araromi-Obu and Ikale (Ago-Alaye) has submitted its report.

Submitting the report yesterday to Governor Akeredolu at the Governor’s Office, the Panel Chairman, Mr Tunde Atere, said the panel among other things recommended that leaders of thought in both communities should, henceforth, refrain from utterances capable of reopening the wounds of the crises .

It would be recalled that governor Akeredolu had on August 5, this year, inaugurated the Panel following the crisis that broke out between the affected communities which led to loss of lives and wanton destruction of properties.

The Panel while submitting its report recommended that governments, both federal and state, should properly define the jurisdiction and authorities of the local government to ensure that everyone residing within the defined geographical boundaries submits to and benefits from the authority of the administration in place.

It also advised the state government on the need to establish an office, Institute of Peace and Conflict Resolution in the state with the aim of keeping abreast of crisis situation in the community, and detect early warning mechanism that would enable government spring into action to avert the crisis in earnest.

The Panel Chairman explained that throughout the exercise the Panel had peaceful and mutual trust with traditional rulers, Chiefs, youths, leaders and other stakeholders in the two communities, with the public sitting held between 11th and 15th September.

He added that in the course of carrying out the assignment, the Panel approached every issue dispassionately, without fear or favour.

Receiving the Panel report, Governor Oluwarotimi Akeredolu, appreciated the committee on behalf of the people of the state for the great work, adding that he was happy that since the committee was set up and started work there was no record of anything untoward between the two communities involved.

The governor specifically promised to look at the report with a view to ensuring a lasting peace in the affected communities.

According to the governor, the people of the two communities have been living together in peace and love for several years and this must continue.

He lauded Panel for winning the confidence of the relevant stakeholders in the affected communities throughout the state assignment.