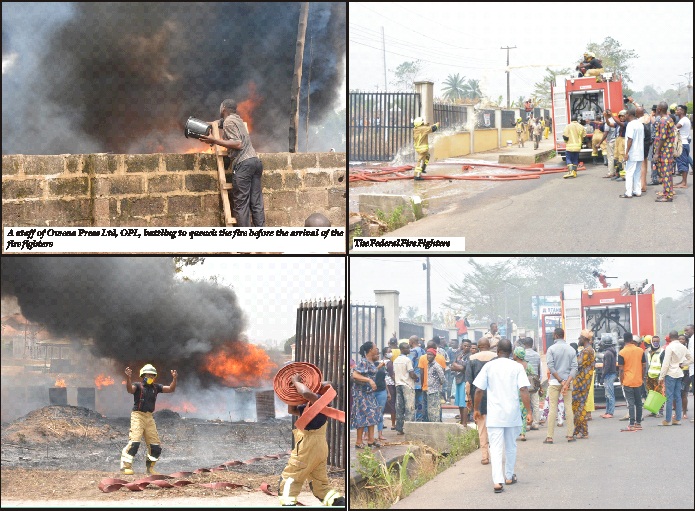 The timely intervention of men of the Federal Fire Service yesterday averted what could have resulted into a catastrophe and a colossal loss as an inferno broke out from the premises of the Ondo State Development and Property Corporation, OSDPC, Ijapo, causing apprehension for property owners in the area.
The fire fighters’ prompt intervention saved the day for Owena Press Limited, OPL, publisher of The Hope newspaper, OSDPC and the office of the Assistant Inspector General of Police, AIGP zone 17 and the adjoining buildings in Ijapo.
The fire was first noticed around 12:10pm reportedly caused by a yet to be identified staff of OSDPC, burning refuse at an uncompleted building next to Owena Press premises which suddenly became uncontrollable, forcing people to scamper for safety. Initial efforts by the staff of Owena Press and OSDPC to bring the fire under control was thwarted by the combustive bitumen materials kept on the OSDPC site.
As black smoke with flames from the combustive materials bellowed into the sky, many people took to their heels for fear of being trapped.
The Hope correspondent observed that many car owners risked the dangerous raging waves of the inferno and drove their cars to safety, while others were seeing panting and praying to God to thwart the impending calamity.
Vehicular movements along the long stretch of the Reuben Fasoranti way, Ijapo, scene of the fire was interrupted for some time as people watched with bated fear while waiting anxiously for the intervention of the fire men.
It was gathered by The Hope that some drums containing bitumen materials kept in some drums used by a construction firm – Nigerian Sonel Bonel along Ado/Owo Express Road between 1979 and 1983 for road construction escalated the inferno.
After spirited efforts by the people to put off the fire, men of the Federal Fire Services came to the rescue, a battle that took them several minutes before the fire was put out.
Men of the State Fire Services who were earlier contacted said they had no water and equipment to respond to the distress calls.