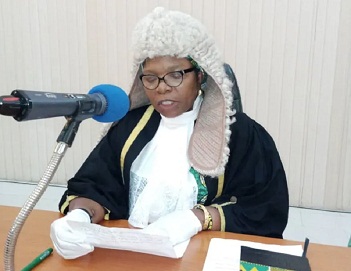 The Speaker of the Ekiti State House of Assembly,  Olubunmi Adelugba, has called on the people of Emure Ekiti to participate  in the 2023 general elections.

She equally urged the people to be more involved in politics and be interested in the next set of leaders to be produced in the 2023 polls.

She promised that her impact would continued to be felt in Emure Constituency which she represents at the State House of Assembly and would always work hard for better standard of living for her constituents.

The Speaker spoke in Emure Ekiti at the weekend used the opportunity of the event to give account of her stewardship especially on the projects she had influenced, attracted and sponsored in her constituency since she was elected into the House in 2019.

She also donated two operational motorbikes to local security agencies, one for the Nigeria Security and Civil Defence Corps (NSCDC) and another one for the Ekiti State Security Network Agency, otherwise known as Amotekun Corps.

Speaking at the event, the Elemure of Emure Ekiti, Oba Emmanuel Adebowale Adebayo, expressed happiness at the emergence, Mrs. Adelugba as the Speaker of the State House of Assembly.

Oba Adebayo prayed for the success of Governor Biodun Oyebanji in piloting the affairs of the state and Adelugba in leading the parliament to deepen and enrich governance in the state.

The monarch also thanked Oyebanji for appointing an indigene of Emure, Mr. Ebenezer Boluwade as a Special Adviser on Agriculture and Food Security in the state cabinet wishing the appointee a successful tenure of office.

The Elemure called on all indigenes of the town wherever they are residing within and outside the shores of the country to come back and develop their hometown.