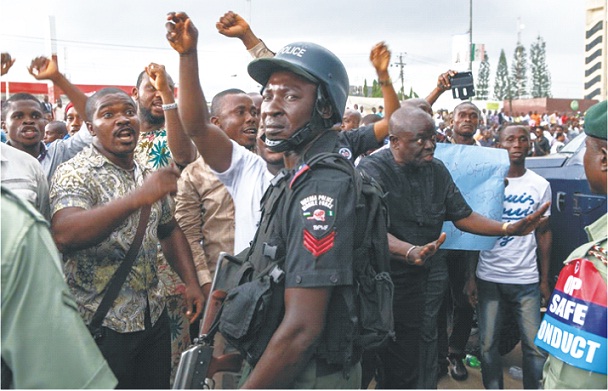 Election period in Nigeria is always full of suspense, as everybody tends to be anxious to know how the election will end. The anxiety is usually on both sides – the candidates and the public.

Since many people tend to indicate interest in an elective position, for the sake of fairness and to promote internal democracy, it has been the practice of political parties to conduct primary elections. That is how the parties will determine their candidates for each position. The primary election can be direct or indirect.

Unfortunately, elections in Nigeria are sometimes characterised by violence, which may not be unconnected with the do-or-die attitude of some politicians towards the electoral process and the lust for position. Such violence occurs mostly during general election, but primary elections are not always immune to cases of breach of peace.

A peace and gender expert, Chief Bridget Osakwe, in February this year noted that the conduct of political parties’ primaries in the country ahead of the 2023 general elections would play a significant role in reducing violence and litigations associated with outcomes of elections in Nigeria.

Bridget, who is the National Network Coordinator for the West Africa Network for Peacebuilding (WANEP) in Nigeria, urged political parties to allow democratic selections of parties’ flag bearers and candidates for elective positions, affirming that imposition of candidates and godfatherism would not augur well for the country in the 2023 elections.

Speaking last month in Abuja at the  second quarterly meeting of the Inter-Agency Consultative Committee on Election Security (ICCES) with the Independent National Electoral Commission (INEC), the National Security Adviser (NSA), Major – General Babagana Monguno (retd) expressed his fears over the growing uncertainty heralding the conduct of party primaries for 2023 elections, and the unabated spate of violence that threatened the upcoming Ekiti and Osun States governorship elections.

Represented by a Director in the agency, Sanusi Galadima, Monguno had noted with utmost concern the growing uncertainty heralding the conduct of party primaries for 2023 elections.

According to him, “This is in addition to the unabated spate of violence that threatened the upcoming  gubernatorial elections in Ekiti and Osun States, arising from internal party wranglings, increasing acrimony and bickering amongst political actors, as well as the inability of various contending political blocs to amicably resolve differences in line with democratic tenets.

“Consequently, the above disturbing development has already culminated in intense power play capable of heightening unnecessary political tension across the country. More worrisome is the unguarded utterances of some highly respected individuals and groups which more often than not amplify divisive narratives, to the detriment of national security and stability,” he said.

At the House of Assembly primary election of one of the major parties in Alimosho constituency of Lagos State, there was a breakdown of law and order, which the chairman of Mosan-Okunola Local Council Development Area (LCDA), Princess Olabisi Adebajo, attributed to misinformation and distrust by some members of the party. She said the delays in the conduct of the primary election led to suspicion among party supporters who thought the process had been hijacked, hence the violence.

At the Ikotun-Igando Local Council Development Area secretariat on May 27, the House of Representatives primaries of one of the parties degenerated into a bloody combat. In an online video that went viral, thugs fought physically and exchanged gunshots. No fewer than four persons reportedly died in the incident.

A day after the Lagos mayhem, thugs sacked the Anambra East LGA secretariat in Otuocha, venue of the Anambra North Senatorial District primary election of one the political parties in that zone. The insurrectionists forced a postponement, as party officials and monitors scampered for safety. Some party officials allegedly blamed the violence on two of the contestants.

Cases of violence were also recorded at Ile-Ife, Osun State, and in Asa Local Government Area of Kwara State, venue of a House of Assembly primary election. In Oyo State, one of the primaries for the Ibadan South-East House of Assembly election was characterised by violence when two leading party officials reportedly invaded the Alake Academy venue of the exercise with soldiers, who chased away some of the participants.

Pockets of Violence were equally recorded in the Idanre/Ifelodun and Akure South/Akure North federal constituencies in Ondo State. Similarly, wild disruptions to polling were recorded in the Chanchaga, Niger, Ekiti, Nasarawa and Taraba states party primaries. Delta and Ogun states were not left out as well.

Speaking with The Hope, Professor Simon Ehiabhi from the Department of History and International Relations, Adekunle Ajasin University, Akungba-Akoko, noted that violence has become part of Nigerian politics because people see public offices as an avenue to make money, which explains why they celebrate when appointed into any public office.

Ehiabhi stated that the attractive nature of political offices makes people prone to violence when they realise that they are about to be voted out after investing a lot in the process.

“It is difficult to rule violence out of Nigeria’s politics. My only wish is that it does not degenerate to anarchy,” he added.

As a way forward, the seasoned professor of history stated that while violence cannot be suppressed in the meantime because Nigerians are already used to it, proper political education can be a solution in the long term.

Speaking in a similar vein, Dr Adedayo Afe, also from the Department of History and International Relations, Adekunle Ajasin University, Akungba-Akoko stated that crisis during party functions is not a recent phenomenon in Nigeria.

His words: “In a country where people live in abject poverty and there is insecurity, even if you want to organise a family meeting, be expecting a crisis. Even during general elections, you will see people trying to forment trouble. Uninvited people will be there for one business or the other. For instance, some people attended the conventions just to make money.”

Afe recommended fair play as a way to prevent future occurrences, noting that “If there can be fairness, equity and justice, there will be relative peace.”