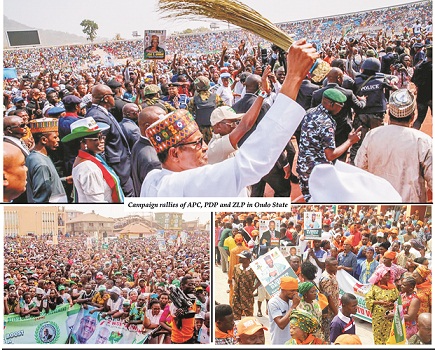 By Jubril Bada & Adekola Afolabi
\
Major political parties in Ondo State yesterday intensified their house-to-house campaigns in the state and mobilisation of voters to come out enmass to vote on Saturday.

The Independent National Electoral Commission (INEC), had on Monday this week lifted its earlier ban placed on campaigns by political parties across the country.

This followed the postponement of the general elections by one week.

Investigation by The Hope revealed that the two major political parties in the contest namely the ruling All Progressives Congress, APC, and the main opposition Peoples Democratic Party,  PDP, have resumed their open campaigns including that of door-to-door campaigns across the State.

Other political parties in the elections, the Social Democratic Party, SDP, Action Alliance, AA, and Zenith Labour Party, ZLP, among others, were not left out in the campaigns as they also canvassed for votes from the electorate.

Speaking with The Hope, the Action Alliance (AA) candidate for Ondo North Senatorial candidate, Dr. Tunji Abayomi, said he would use the opportunity to visit and campaign in few locations yet to be covered during the last campaigns.

He disclosed that although he had already visited all the six local governments under his senatorial district, he would use the three days opportunity to meet with different organizations, groups and relevant stakeholders vote for his party, Action Alliance.

Abayomi also appreciated the party’s supporters and all the electorate in Ondo North Senatorial District for their unalloyed support, urging them to translate it to votes by voting massively for him in the Saturday February 23 elections.

He said he was happy with the warm reception given to him during the last campaign tour of the six local governments before the elections postponement, promising not to disappoint the people if elected.

He called on his supporters to remain focused and determined, adding that he is confident of victory at the polls.

In separate interviews with The Hope, the state coordinator, Buhari Campaign Organisation, Mr. Henry Kehinde-Bello, said the All Progressives Congress (APC) has intensified its effort to continue its campaign from where it stopped before the shifted elections.

He made known that the party had embarked on house to house and door to door campaigns across the state ahead of the Saturday’s poll.

Kehinde-Bello,who explained that the party will retake its campaign to the electorate on the need to vote for President Muhammadu Buhari for a second term to reform the country.

According to him, “The fight against corruption by Buhari-led APC administration has yielded positive results which has brought drastic reduction of embezzling government money and blocked loopholes of stealing public funds.”

He noted that those who do not want Buhari to return as the president of the country are the beneficiaries of corruption and corrupt government.

The State Chairman of the Social Democratic Party (SDP), Chief Korede Duyile disclosed that the party has gone back to the field to mobilise voters in other to turnout enmass next Saturday to their polling units to vote.

He said the extension has afforded the party a good opportunity to reach out to more prospective voters and woo them to vote for candidates of the SDP.

He said: “We have been going from house to house to encourage our people not to be disillusioned.”

Speaking, the state Administrative Secretary, Atiku Presidential Campaign Organisation under the platform of the Peoples Democratic Party (PDP), Mr. Olumide Ogunkua condemned the INEC for banning campaigns after the postponement of the polls, saying that the commission has no valid reason to step down campaigns.

He disclosed that the party has embarked on road show, door to door and outskirt campaigns to further spread and campaign for the Presidential candidate of the PDP, Alhaji Atiku Abubakar immediately the ban on campaign was lifted by the INEC.

Ogunkua , who explained that the party has no doubt in the candidature of Atiku expressed optimism in the quality of Atiku as the candidate of the PDP to lead it to victory in the election.

He reiterated that Nigeria will start to work again following the campaign promises of Atiku to create jobs, and that women would take the centre stage of his government.

“We are not to win alone but the victory will strengthen democracy in Nigeria,” he boasted.