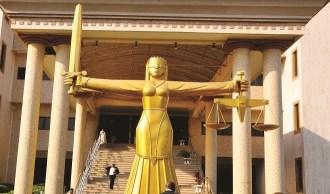 A 46-year-old clergy, identified as  Ige Ayodele Johnson, had appeared before an Akure Chief Magistrate’s Court over an alleged  N1,130,000 employment scam.

Johnson, who resides in Ijoka  area in Akure was charged  with alleged  fraud and obtaining under false pretense.

The prosecuting counsel, B.O  David, told the court that Johnson committed the offence between March 27 and April 11 2019.

David said  that the defendant allegedly obtained the sum of N1,930,000 from one Adeniyi Adetoye on the pretence that he would secure  a Federal Government employment for him.

He said the defendant allegedly knew the same to be false.

David alleged that the defendant stole the money and converted it into his personal use.

The defendant, sometimes in 2021 was  said to have given false testimony at the State High Court in Akure that he had returned the money he fraudulently obtained to the complianant.

David said the defendant had been at large since he was given administrative bail  at the NSCDC office, before he was apprehended at his residence.

The defendant pleaded not guilty to the charges.

His lawyer. Akinnifesi, prayed the court to grant his client bail in most liberal terms.

The Chief Magistrate, Mrs Folashade Aduroja, granted the defendant bail in the sum of N1,500, 000 with two sureties in like sum.

She adjourned the matter till February 20, for hearing