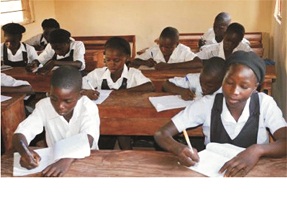 What a more effective way of communicating to the heads of such schools not to collect illegal levies? Whether the allocation would suffice or not to run the schools is another issue entirely, but such case as of Success in a Delta school and the headmistress being suspended would not arise this session in Oyo State.

This also brings us to unnecessary hostility of parents whenever their wards are asked to pay levies. They want school administrators persecuted for extortion. One therefore wonders if such parents ever visit the schools, or whether they ever consider that like their homes, schools are run at a cost. It is very sad that parents pretend that all that is done in school is to teach the pupils, and funds are not required for their personal upkeep.

If government cannot supply chalk, toiletries and security, the teachers should bear the cost. The prevailing harsh economic situation seems to have made such parents less realistic. Our primary and secondary schools deserve to be adequately catered for by government.

The action of Oyo State Governor in releasing running costs is a right step in the right direction. Parents-Teacher Associations should be more active in compelling members to be actively involved in provision of education.

Teachers themselves have not helped the situation so far as they rarely make demand for infrastructural upgrade. Their agitations are essentially on personal emoluments, whereas professional demands for advancement of the work environment would necessarily result in an overall advancement of their sector.

But we need to pay detailed attention to all sectors of the Nigerian socio-economy. A situation where every organisation complains of paucity of funds on any given opportunity is not reasonable enough because not a few of such ‘underfunded’ agencies are involved in misapplication or misappropriation of funds. Is it not embarrassing that cost of road construction in Nigeria is said to be higher than elsewhere in Africa and yet, a good number of such contracts are poorly executed with road failures rampart and great hazards, a routine on the highways. Many officials have been accused or indicted of diversion of public funds. Not a few have been apprehended for money laundering and yet their departments or agencies claim to be victim of paucity of funds.

Until some three years ago, the Joint Admissions and Matriculations Board was presented as an underfunded organisation, that same organisation is now a source of revenue generation to the Federal Government. At the last count, in spite of reduction in fees paid by applicants, over seven billion naira was generated by the Board which had presented itself as neglected. Any wonder that an official in its cash office lost some N300 million to a hungry python at large! Is it any surprise that a very senior serving public official was dispossessed of some N400 million by those providing him security who then disappeared into thin air?

An atmosphere where an army general was kidnapped and murdered, police commissioner seized and held hostage, high court judge held captive until ransom is paid, is in great danger. It goes without saying that hunger, robbery, suicide and general insecurity would be order of the day. It could not have been otherwise in a country where citizens protest that their kinsmen were not posted to juicy ministries. They do not protest incompetence or placing round pegs in square holes. The elites having taken their wards to private schools does not care about environment, manpower or quality of education dispensed in their communities. They may help to process petition against a head teacher who levied pupils to reroof a classroom which pupils are exposed. Any wonder that a graduate that served the nation five years ago claims to be jobless and when asked how he finds resources to maintain his family, he admits to be teacher. He is fervently praying for a job opening with juicy conditions. He is ready to pray for a job slot, as much as a million naira where he can benefit from misapplication of public funds and extortion of his clients. His parents consult spiritualists and politicians who can help him get a job where he can have a share of national cake in establishments where the complaint is ever paucity of funds. Do you know that having got such plum jobs, they have no time to encourage their children to cultivate appropriate habits that make them prosper in education and life? They pay for miracle centers to facilitate success in examination and buy admission slots. Gradually, a competitive examination into the civil service has been frustrated to facilitate employment through the back door. Some of them send their wards abroad to escape the rot in education which their actions and inactions have brought about.

It is a welcome development that government would eradicate corruption which has given birth to the present state of anomie. Government must realize that throwing funds at corruption and its features cannot help the situation. Using scientific parameters to determine allocations to Ministries, Departments and Agencies and measuring success in the same vein would go a long way to realizing the goal. Formal education in design, delivery and administration must be taken as critical. A policy that confers respect and dignity on teachers in public primary and secondary schools in an environment where pupils could love to belong would change the orientation of corruption. Pupils and teachers who carry out their enterprise in dilapidated classrooms submerged in flood are in the process of practical corruption.

Teachers and their heads who keep instructing their wards in roofless classrooms encourage them to tolerate and submit to corrupt practices. The government of Seyi Makinde, PDP has given practical expression to a component of the Education Policy of the government of Action Group. We hope that paucity of funds would not abort it. We know that other states would give prominent to the policy as a first step to adequate funding of primary and secondary education. This way, school administrators would participate in policy implementation and recognise themselves as important actors in the policy process. Including them in policy process would enhance quality of work, reduction of costs and mobilization of local support for public schools and property. This transparent process would boost the credibility of government and morale of Parent Teachers Association.

When financial allocations to primary schools get to destination, the huge investments in the sector are more visible and appreciated by citizens. This generates support for government, making it gain confidence to tackle other issues of public interest. But more importantly when pupils graduate from conducive environment, they are more likely to carry a beautiful picture of their community and nation. To continue to raise our children in neglect and penury is to sustain the mentality of deprivation and paucity, whereas patriotism and competence are an antidote to lawlessness.