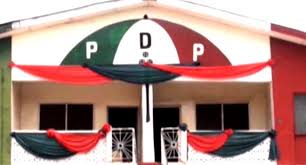 From Francis Akinnodi, Ore
|
The candidate of the Peoples Democratic Party, PDP in the last House of Assembly election for Ondo West Constituency II in Ondo State, Engineer Abiola Oladapo has called for the total cancellation of the election that was purportedly held on March 9, 2019 citing irregularities and intimidation of voters.

He said the conduct of the election defied all decent, civilised and acceptable approaches to democracy and as such election can not be said to have held.

Oladapo while addressing media men in Akure said, “The House of Assembly elections in the state was characterised by violence, ballot snatching, ballot stuffing, vote-buying and threat to lives.

“The entire constituency and by extension the Ondo West and East local governments were riddled with uncivilised attitude of some political party to win the available seats in the state by all means.

“I and my party have resolved not to allow this rape of democracy go unchallenged, hence our resolve to approach the judiciary as the only democratic process available.

We had approached the tribunal because if the broad daylight robbery against democratic attitudes go unchallenged, it is going to consume the nation and our democratic norms and process.”

He said the team of lawyers being lined up by him for the legal battle is been led by Barrister Remi Olatubora.

Oladapo has filed his case at the tribunal before the expiration of the window for such opportunity as laid out by the Electoral guideline.

Oladapo holds that no election in the real sense of the word was held in Ondo West Constituency II as admitted to by the Independent National Electoral Commission (INEC) in their report on the election.

His prayer is that justice will be served and a fresh election ordered in the constituency calling the last election a fluke and an assault on the people whose will to elect their representative was forcefully taken away from them.

The sitting of the tribunal starts in about a week from now as the defendants have been served the notice of the trial.