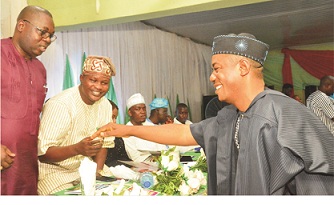 All Progressives Congress (APC), Ondo State chairman, Mr. Ade Adetimehin  has affirmed that the unprecedented performance of the  administration of Governor  Oluwarotimi Akeredolu would earn his party the opportunity to retain the state during the forthcoming 2020 governorship election.

He submitted  that the achievements of Akeredolu in the areas of road construction, education, regular payment of workers’ entitlements among others placed the ruling party in good position to win  elections in the state.

The APC chairman stated this during a Dinner  and Award Nite  organised by the  State Council of the Nigeria Union of Journalists (NUJ).

The ceremony that attracted politicians   where some professionals  were honoured including an APC governorship aspirant, Mr. Isaac Kekemeke, the State NLC Chairman, Mr. Sunday Adeleye and the State chairman of SUBEB, Princess Oladunni Odu

Adetimehin, who was the chairman of the occasion  expressed optimism that with satisfactory performance of Akeredolu’s administration, the party would not face difficulties in retaining Ondo state and would continue to rule at the federal level in years to come.

In an address, the Special Guest of the occasion,  Mr.  Ife  Oyedele who was represented by his wife, Mrs Omobolanle Oyedele, felicitated with NUJ members on the occasion of their 2019 Press Week and urged them to continue to stand for the truth and objectivity in discharging their daily duties.

Speaking on the occasion, Governor Oluwarotimi Akeredolu who was represented by the state Commissioner for Information and Orientation, Mr Donald Ojogo, reiterated his administration’s commitment to enhancing welfare of the media and the professionals in the state.

Earlier, the State NUJ Chairman, Adetona Aderoboye described the Union’s Awards as the most credible which were based strictly on the track records of the recipients.

Responding on behalf of the award recipients, Mr. Kekemeke and Princess Odu expressed appreciation to the union for counting them worthy of the honours, pledging to do more for humanity.

Highlights of the event included presentation of gifts and certificates to some journalists who had distinguished themselves during the year under review.