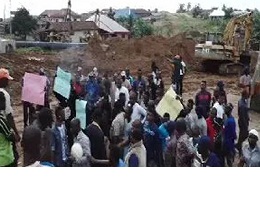 From Akinnodi Francis, Ore
|
Youths in Ore community in Odigbo Local Government area of Ondo State at the weekend caused serious gridlock on Ore/Benin and Ore/Akure roads while protesting against their exclusion in oil pipeline reticulation project in the community.

The protesters stormed the sites of the project and prevented the continuation of work.

The inscriptions on the placards carried by the protesters include: “EFCC Should Probe this Project”, “This Injustice Done to Shimat Must Stop,” “Zhakhem, Pay Us our Money,” among others.

Youth leader of Odigbo kingdom, Mr. Matthew Akinsola told newsmen that they were not carried along in the execution of the project, noting that usually, there was a certain percentage of the contract meant for the youths

Akinsola disclosed that when Shimat company was handling the reticulation project, many indigenes of the community were employed and the community benefited.

He, however, called on President Muhammad Buhari to intervene in the process.

Corroborating the Youth Leader, General Manager of Shimat Company, Ore, Mr Ken Osadebe, noted that there was great injustice meted out to his company by Zakhem company, who got the project from NNPC before subletting to others.

Osadebe disclosed that there is 10 per cent embedded in the contract to cater for community and youths, but alleged that the money was not paid by Bradama.

All efforts to speak with the personnel of Bradama company on the site proved abortive as they did not volunteer to comment on the development.