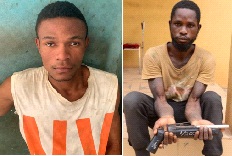 Detectives of the Ondo State Police Command have arrested a suspected kidnapper, Nworih Tochukwu, who abducted a six-year-old girl in her mother’s car at a groceries’ shop in Akure and a man for illegal possession of one locally made Revolver Pistol

The Hope gathered that the kidnapper was arrested on December 31, 2022 at a POS stand in Akure while trying to withdraw part of the ransom money paid to secure the release of the child.

The suspect was reported to have abducted the girl, Nwasi Ezedima, while her mother left her in her Toyota Corolla Car at Lafe Area, Akure, to buy some  groceries for the family.

The mother of the girl, Mrs Chukwu-Ezedima, consequently reported the kidnapping of her daughter on December 21, 2022, at 9.00p.m.

The spokesman for the Ondo State Police Command, SP Funmilayo Odunlami-Omisanya, disclosed this in a statement made available to newsmen in Akure on Saturday.

Odunlami-Omisanya said that the suspect, allegedly demanded N50 million from the family as ransom.

But she did not say if the ransom was paid in full.

“During interrogation, the suspect confessed to the commission of the offence, while the victim was rescued unhurt.

“The suspect will soon be arraigned in court,” the police spokesperson said.

The Police spokesperson also said the Nigerian Army has handed over a man identified as Isiaka Adams, arrested in unlawful possession of firearms to the police.

Odunlami-Omisanya said that a patrol of the Nigerian Army while on routine check at Elegbeka in Ifon, Ose Local Government Area, got information about the man (names withheld) allegedly in possession of a revolver.

She said that the patrol team subsequently investigated the allegation and arrested the man with the locally made gun.

“The suspect initially claimed he found the gun on a farmland, but later confessed that the gun was given to him by a welder (names withheld) currently in a Correctional Centre in Okene.

“The suspect has been handed over to the Police and would soon have his day in court,” Odunlami-Omisanya said.