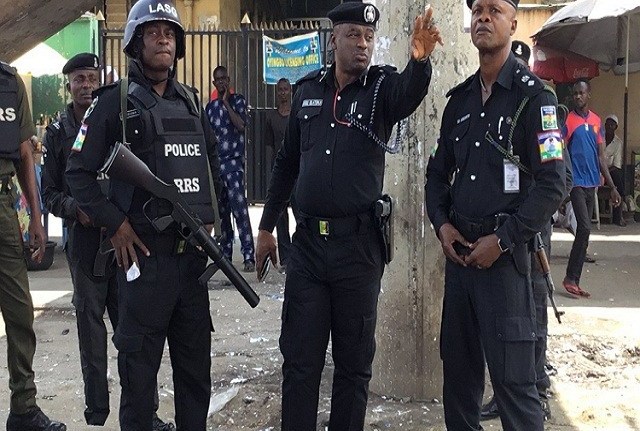 Police command in Ekiti State have foiled a planned protest by contractors executing various projects at the State Universal Basic Education Board (SUBEB).

The police had deployed men made up of regular and mobile officers to protect facilities in the area, following a rumour that some contractors executing projects for the agency were planning a protest.

The policemen who were conveyed to the premises in three vans were seen in strategic locations around the SUBEB compound located at Stadium road, Okesa area of Ado Ekiti.

Though the speculated protest did not eventually hold, rumour had it on social media that the Ekiti SUBEB contractors were planning a protest over huge debts allegedly owed them owing to alleged flagging of the SUBEB’s account.

Sequel to the tension triggered by the rumour and to prevent breakdown of law and order, the Commissioner of Police, Mr Asuquo Amba quickly mobilised his men to safeguard the agency.

When called on why the policemen were drafted to the office, the Police Public Relations Officer, Ekiti state  Command, Mr. Caleb Ikechukwu, said “we took proactive action to prevent government property from being vandalised.

“Police as a responsible body must ensure that there is no breach of public peace. Though, we were told that there was no protest, but we still have to take the action to safeguard the place and the staff”.

Speaking on the development, the Chairman of the Ekiti SUBEB Contractors, Mr. Bankole Adeleye, debunked the social media report that they  were at loggerheads  with the state government over huge debt owed them.

Adeyele, urged the people to discountenance the rumour, saying they never planned to hold any protest against the government.

He said the contractors’ union, which he superintends over just emerged from a meeting with the SUBEB management team led by its Chairman, Prof. Francisca Aladejana, where they discussed the development of education in the state.

“We were here today for a meeting with SUBEB management and became surprised when we were told that the police were deployed because of our planned protest.

“This is a lie from the pit of hell. Even when we had it so rough under the last administration in terms of payments for contracts we executed, we never resorted to violence.

“What we are concerned about is to see infrastructural development in our schools and not one protest that won’t help the state”, he said.