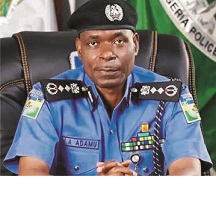 Police frown at unauthorised use of siren, covered number plates

By Michael Ofulue
|
The Ondo State Police Command has warned against unlawful and unauthorised use of siren, evolving light, and unbridled number plates by private vehicle owners across the state.

The Police Public Relations Officer, CSP Femi Joseph, told The Hope Metro that the Inspector General of Police was worried over the rate at which private vehicle owners use siren in public places.

Joesph hinted that the IGP described the action of those covering their number plates as criminal and unacceptable, noting that it was becoming rampant across the nation.

He explained, ”There are categories of people who are allowed under the law to use siren in public places and such individuals are; the President, the Vice President, Senate President, Governors and their deputies, speaker of Federal House of Representatives and some other important government officials.”

According to him, apart from the persons mentioned and other important government officials, other private vehicle owners who flout the order would be apprehended and prosecuted.

”As I speak to you, the Assistant Inspector General of Police in charge of zone, Osogbo comprising Ondo, Osun and Oyo States AIG Bashir  Makama, has set up a Special Task Force saddled with the responsibility of arresting violators in the three states,” he stated.