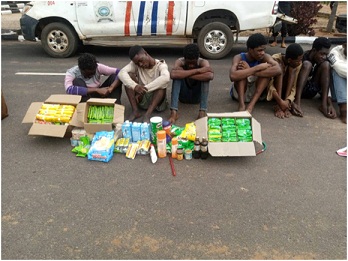 Ekiti State Police Command has confirmed the arrest of a notorious armed robber who has masterminded and led various bank robbery operations across the state.

The command, through its Public Relations Officer, Mr Sunday Abutu, (DSP), said the suspect, Peter Ajewole,  a.k.a ‘Peter Ifaki,’ and a native  of Ifaki-Ekiti, was arrested by the operatives of the Rapid Response Squad (RRS) attached to the command during a routine operation in the state.

Abutu explained that the suspect’s other gang members were arrested in 2021 and are currently serving jail terms in the Ado-Ekiti Correctional Centre.

During investigation and interrogation, the PPRO, said the suspect confessed to his involvement in series of criminal activities, including the robbery attack on an old generation bank in Ifaki-Ekiti in 2018, where a Police Inspector was shot dead.

He added that the suspect has  also confessed that he masterminded  the robbery of Wema Bank, Iyin-Ekiti branch in the year 2020, as well as the recent attack on a private hospital in Ado-Ekiti, where patients and nurses were robbed and disposed of their belongings.

In a similar development, the Ekiti State Police also confirmed the arrest of three persons in connection with the burglary of a phone market and shops in Ado-Ekiti metropolis, last month.

He gave the names of the suspects as Femi Ayomide, Bode Akinola and Kayode Dolapo.

According to him,  the trio, who are currently undergoing interrogations at the command’s headquarters in Ado-Ekiti, were arrested upon a credible tip-off by members of the society.

He explained that during interrogations, the suspects confessed that the exhibits recovered from them were stolen from the shops they burgled opposite  a popular Hotel along llawe-Ekiti road, Ado-Ekiti.

Abutu noted that the owners of the shops have, however, reported at the police station and identified the recovered exhibits as parts of the items carted away from their shops.

He disclosed that the suspects would be arraigned accordingly in a competent court of jurisdiction as soon as investigations were completed.